Project Gutenberg <無雙> has been one of Aaron Kwok’s (郭富城) most challenging films to date. Playing a painter who also happens to have a talent in creating counterfeit products, Aaron said his character required a lot of preparation.

“I needed to have the aura of that of a professional painter,” he said. “I originally wanted to arrange meeting with a painter, but because my work schedule didn’t work out, I ended up doing most of the research online. It’s a good thing that I already had this habit [of painting].”

Project Gutenberg also stars Chow Yun-fat (周潤發), the leader of a counterfeit banknote organization, with Liu Kai-chi (廖啟智) and Zhang Jingchu (張靜初). “Fat Gor was very prepared. He had a very clear understanding of his character and the story. I definitely felt the chemistry and fireworks during our scenes together.” 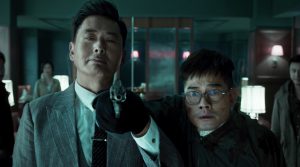 Aaron described his role “Lee Man” as a “complicated character.” He shared, “Both Fat Gor and I have two different identities. Zhang Jingchu actually has three identities. It’s a complicated role. I may look the same, but I have different identities. That is why I ended up reading the script six times before filming started. It took me a long time to go through the script, especially on the first read, because I had to analyze every scene and character. In my head, I had to picture how my character would respond to certain situations and how the scene would play out.”

Director Felix Chong (莊文強) started Project Gutenberg in 2008. As the film required a large budget, it took Felix nearly six years to find a production company and investor for the film. “We actually purchased a printing machine to produce the counterfeit American banknotes,” shared Aaron.