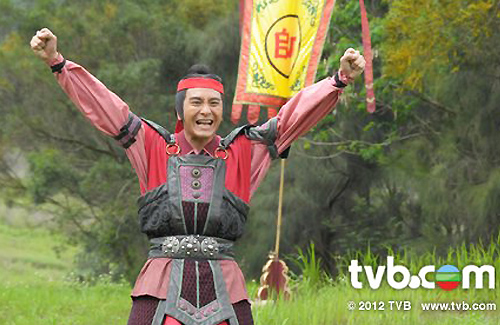 The Apple Daily awards, dubbed as “The Worst Television Awards” by the tabloid magazine, was the fourth annual television award presented by Apple Daily. Check out the hilarious categories and winners below:

Asia Television’s largest shareholder, Wang Zheng, won Apple Daily’s Worst Actor by a large margin, occupying 61% of the 13,828 votes. To convince the Hong Kong government to recede its decision on giving City Telecom a free broadcasting license, Wang Zheng mobilized his station’s entire staff to participate in a widely publicized protest on the streets of Hong Kong. The protest was aired live on ATV. Many viewers expressed their embarrassment for Wang Zheng and his artists. Their artists were forced to perform silly dances, and many of the Mr. Asia contestants were forced to be Wang Zheng’s bodyguards when he was surrounded by the paparazzi. “I can’t believe this news made it to the front page headline. It’s an insult,” an Apple Daily reader expressed.

Despite the popularity of the drama (and praise for Raymond Wong’s performance), a general consensus has been made regarding to Niki’s performance – she can’t act. She beat out her competitors by winning 28% of the votes.

Myolie Wu from Wish and Switch came second place with 25%, while Christine Kuo from Ghetto Justice 2 came in third with 20%. A total of 13,448 votes were cast.

The last performance at ATV’s Gala Presentation shocked the audience, as the performers looked as if they were calling the spirits of the dead. Viewers claimed that the performance has now become a classic, and they are sure that if the stage ever gets a rebroadcast, the viewership ratings would go up to at least 2 points. ATV won with 30%.

There were 14,410 votes were cast. Second place was Kate Tsui’s one-second rape scene in Highs and Lows, with 22%. Third place was Tavia Yeung’s lip-biting scene in Silver Spoon, Sterling Shackles, with 20%.

Wang Zheng, as well as the rest of the ATV artists, did their own rendition of Psy’s “Gangnam Style” during their protest. Not only were the dance moves horrible to watch, Wang Zheng also did not dance to the beat. Absolutely terrible to watch.

Raymond Lam’s fans were more than prepared to vote for their favorite best actor. The power of Raymond Lam’s fan base should not be neglected! Raymond Lam won the poll with 25%. Kenneth Ma of The Hippocratic Crush won second place, with 19%. Ex-TVB actor Bowie Lam of When Heaven Burns comes to a very close third, with 18%. 19,241 votes were casted.

Apple Daily reported that Charmaine Sheh of When Heaven Burns was initially leading the poll for many days, but in one night, all votes changed gears to favor Kate Tsui. The leading actress poll also had the most votes with 36,970, more than twice the amount of others. It is very possible that Kate’s fans had hacked into the poll!

Kate Tsui won the poll with a large margin of 37%. Charmaine Sheh came second with 34%, and Tavia Yeung of Silver Spoon, Sterling Shackles came third with 12%.

Almost half of all 17,772 votes chose When Heaven Burns as Best Drama. The Jonathan Chik drama, although under promoted by TVB and received a broadcast ban from mainland China, had always remained to be a popular favorite within Hong Kong netizens since it first aired last December. This win is deserving.

It’s hard to forget Prince Ngo Ka Nin’s “Hui, hui, hui, hui…” from King Maker! Maybe working as a scriptwriter for TVB is not so hard after all!

With Samantha’s recent success in her acting career, rumors indicated that Samantha relied on TVB’s big boss, Charles Chan, to get to the position she is in today. In a press conference to denounce the rumors, Samantha cried her whole heart out. It was quite depressing to watch.

A play on the words “most improved” and “leaping away” (飛躍) no other person deserves this award more than the talk show host, Eileen Cha. After leaving Commercial Radio earlier this year, Eileen joined TVB to host the Weekly Exposé <爆足一周>, a weekly gossip news television show. The talk show, meant to “expose breaking news to the Hong Kong public,” was criticized for being weeks late on their exposure, and in the end, TVB decided to not renew the show for a second season.

Many viewers were impressed with the creative intimate scenes in the drama, with Damian Lau and Tavia Yeung’s makeout scene being the most shocking.

Whether it was the setup, the costumes, the lighting, the choreography, or the cinematography, TV Funny was very similar to the American show, MADtv, and the Japanese show, Shimura Theater. TVB has great creativity!

Maybe it is a fault by the marketing team, but The Confidant is actually a time-traveling drama. Remember the bus that appeared at the background in one of the scenes? It was completely intentional.

TVB tried to play it fair by implementing a wide voting system for the selection of the Miss Hong Kong winners, but we all know how that turned out.

Who said only veteran actors deserve this award? After meeting heiress Florinda Ho, 36-year-old Joel Chan is already living a life of retirement. This is a big achievement that all workers around the world dream to have.

With the success that ATV has achieved in recent years, Asia Television’s executive director, James Shing, is definitely the most deserving winner for this award.