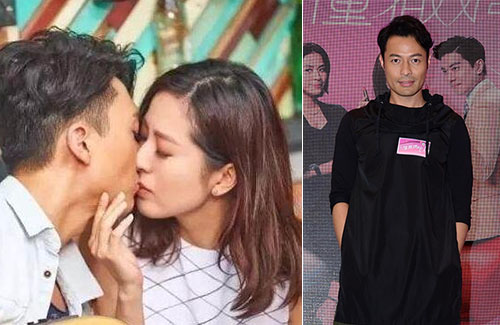 The following article contains spoilers for TVB’s My Unfair Lady, ending on May 28, 2017.

TVB’s My Unfair Lady <不懂撒嬌的女人> has entered its final weekend, and things aren’t looking too great for our favorite couple—Saving (Vincent Wong 王浩信) and Cherry (Natalie Tong 唐詩詠) are finding themselves walking on different paths, with no choice but a breakup.

The romantic comedy drama, also starring Frankie Lam (林文龍), Jessica Hsuan (宣萱), Lai Lok-yi (黎諾懿), and Samantha Ko (高海寧), will be airing its final episode on Sunday, May 28. The drama, which has been on broadcast since May 1, is airing to much fanfare. Many of its stars—including Jessica and Vincent—are seeing a resurge in popularity, with Max Cheung (), who plays Oscar on the show, being reported as a rising star.

Cherry Leaves Saving for His Happiness

To make it up to his girlfriend, Saving goes to Taiwan to find Cherry her dream wedding dress. He comes up with an excuse for Cherry to go to Taiwan, so he can surprise her with a guitar solo of “Walk with You” <陪著你走>.

Cherry, realizing that Saving has a fear of marriage and that he had given up his entrepreneurship dream to marry her, contemplates on whether or not they should continue to stay together. Cherry lets the coin decide, and Saving tosses the coin without realizing its true purpose. In the end, Cherry decides to leave.

Max Cheung, who plays Oscar on the show, has been rising in popularity in recent years, which first started with the sitcom Come Home Love <愛回家> in 2012. His appearance in My Unfair Lady further cemented his status as a rising star, and many news reports with Max as the focus are on the rise.

A recent report stated that the 38-year-old actor had suffered a problem in the trigeminal nerve in his skull, a nerve that is responsible for face sensations and motor movements, ten years ago. It was said at one point that Max was on the brink of being paralyzed in the face, and had to give up his acting career. The condition reportedly caused him to drool excessively.

In a later interview, Max admitted that he did suffer the condition ten years ago, but he has fully recovered. “There was definitely something wrong with my trigeminal nerve. It wasn’t too serious, but sometimes, I wouldn’t be able to move some of my muscles on my face, especially on my left side. I’d unknowingly spill out some water when I drink. It wasn’t drool.”

Max spent half a year working with western and Chinese doctors to do therapy on his face, and also went through acupuncture. “I still practice the muscles on my face from time to time.” (You’re not worried that it will give you more fine lines?) “I’ve always had many fine lines. Those are charisma lines!”

8 comments to Bad Ending for Saving and Cherry? “My Unfair Lady” Max Cheung Rises in Popularity