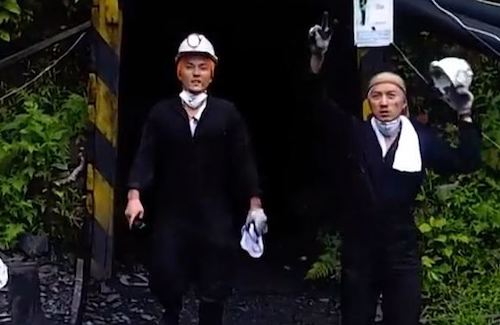 TVB will be broadcasting All Work No Pay Holidays 3 <打工捱世界 3> starting July 29. It will feature the original cast of Benjamin Yuen (袁偉豪) and Mat Yeung (楊明). For the previous two seasons the duo had gone to India, Tanzania, Africa, and Venice, Italy to experience different types of jobs. For the third season, they flew to Columbia, South America to experience different jobs ranging from miner, pageant recruiter, soccer commentator, and cleaner in the Amazon rainforest.

Columbia is famous for emeralds, so Benjamin and Mat tried mining in the first episode. They took a five-hour bus ride from Bogota to the mining area. Then they entered a cave that was only six-feet long. It was extremely dark, quiet, and sealed from the outside world. Mat was worried that he would have a claustrophobic attack, and after all this dangerous work they only earned approximately 20 HKD.

In another episode, they become pageant recruiters and had to stand on the street trying to convince beautiful women to participate in the competition. Mat joked that he was given permission by the director to stare at beautiful women. It was an extremely awkward experience and they faced numerous rejections. Benjamin praised South American women for their voluptuous figures and that he had a hard time adjusting when he returned to Hong Kong.

“All Work No Paid Holidays 3” Trailer