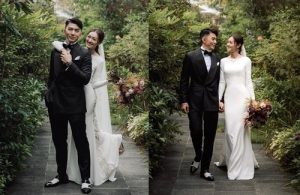 The actor joked that he returned to being a “normal” person after getting hitched. “I only asked for two days off, as I will immediately start filming a new drama, Gatekeepers <把關者們> (tentative title). I rested for one day. Yesterday, I went to settle some bills and just had dinner with Bowie. I think everything is so dream-like,” he gushed. 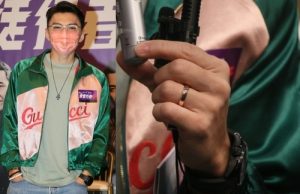 Upon hearing this, reporters joked that Benjamin and Bowie might have a baby by the time they throw the banquet. The new groom replied, “We won’t think about having a baby yet because Bowie is really enjoying her work right now. I don’t want to ruin her career plans – unless we have an accidental surprise.”

Reporters then asked if Benjamin will purposely create an “accident.” The star laughed and expressed, “It’s hard to say. You make it sound like I have premediated plans, but I’m very careful in this regard.”

He added, “I do like kids, so I want to experience being a dad, but it depends on her.”