Breakthrough Performances to Watch in TVB’s “Two Steps from Heaven” 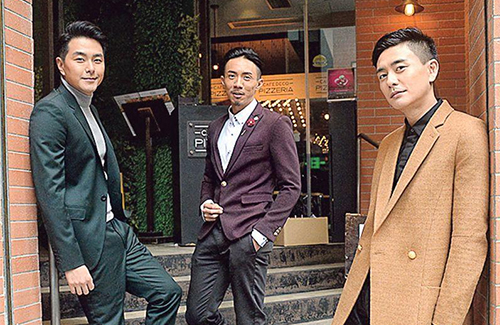 Bosco Wong (黃宗澤) stars as Sheldon, a young PR agent who has a 6-year-old daughter. He is close friends with Sean (Edwin Siu 蕭正楠) and Tim (Louis Cheung 張繼聰), both who also work as PR agents at the public relations agency, The Rainmakers. With the support of Max (Priscilla Wong 黃翠如), who acts as their go-between, the three friends rise quickly in the corporal hierarchy. With her backing, the three friends do everything in their power to solve PR crises.

Two Steps from Heaven is producer Joe Chan’s first collaboration with Bosco and Edwin since 2003’s Aqua Heroes <戀愛自由式>, in which he served as a director. “They’ve both matured a lot since their idol days,” said Joe. “They now have the experience to play more complex characters.”

Bosco, for one, challenged his first role as a young father in Two Steps from Heaven. Joe is particularly impressed with the 35-year-old’s performance on the show, revealing an unforgettable account: “There was a scene about Bosco grieving the death of his mother. Everyone in the studio was rendered speechless as they watched him cry. It took a while for him to calm down. Perhaps it was his experience of being raised in a single parent household that had made it hard for him to pull away. Everyone should watch out for this performance!”

Real-life couple, Edwin and Priscilla, will be playing a couple in the series, albeit with the interference of a third party. They play first loves who reencounter each other many years later.

Joe said, “They’re a very sweet pair on camera. Louis likes to tease them a lot.” (Are they sweet in real life too?) “I don’t know about that. Everyone in the cast are close. They’re a team.”

Priscilla, who usually plays youthful characters on screen, portrays a much more mature and calculating character in Two Steps from Heaven. Joe said, “She makes decisions that affect the other three. It’s a deeper, more complex performance.”