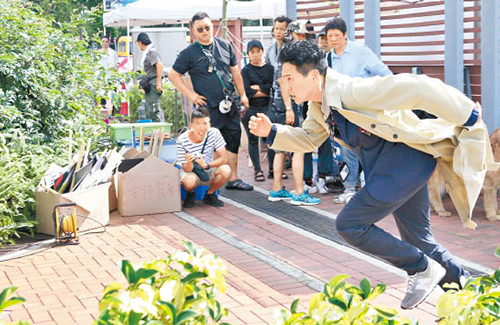 With the past days reaching over 30 C, Hong Kong is back into the grind of the summer. According to several reports, several cast members from the Hong Kong film Death Notify <死亡通知單暗黑者：首部曲「雙雄會」> fainted from the heat and had to be taken from the hospital. Main star Chilam Cheung (張智霖) lucked out, but the actor had to wear run through the streets wearing three layers of clothes.

Death Notice is based on the Chinese novel of the same name, and stars Chilam, Louis Koo (古天樂), Francis Ng (吳鎮宇), Myolie Wu (胡杏兒), and Pakho Chau (周柏豪). The story centers on a serial killer who leaves behind a death notice for the cops before murdering a victim. The film is directed by Herman Yau (邱禮濤).

A few days ago, a large-scale scene was shot near Admiralty’s Tamar Park along with nearly one hundred background actors. The scene was meant to take several days to complete. As the weather had consistently hovered above 30 C, a source revealed that several background actors ended up fainting from the heat, and had to be taken to the hospital.

One of the actors who survived the heat described their experience on social media. The actor witnessed another one of peers fainting in the middle of filming, which prompted the crew to temporarily halt the shoot. Filming resumed after the cast member was sent to the hospital. In the social media post, the actor complained about how the crew isn’t allowing the cast enough time to rest. A lot of these actors also had to wear long-sleeved clothes for many hours underneath the sweltering sun.

In regard to the incident, the film’s studio China 3D Digital Entertainment said, “Two days ago, it is true that several cast member fell sick because of the hot weather. Some of them had a heat stroke, but they recovered after resting.”

Chilam, Charmaine Sheh (佘詩曼), and Timmy Hung (洪天明) arrived to work a few days later, doing an action scene for the film. Chilam was asked about a crew member’s hospitalization a few days ago, to which Chilam said, “I wasn’t there, but it is common to get a heat stroke when you’re filming in the heat. That’s happened to me many times. Background actors have it the worse. They have to stand there for several hours under the heat. That’s why I enjoy filming during the winter. At least my makeup won’t melt.”

On what he’s doing to combat the heat, Chilam said with a laugh, “I just take it as it is. Actors may look glamorous in front of the camera, but only he knows the pain. The only thing we can do is to keep our emotions in check. It’s pretty tough! This money is not easy to earn!” Chilam then thanked the social media user for revealing the hardships of actors.

Charmaine said, “Don’t underestimate the summer. When you’re outdoors, make sure to drink more water, and try your best.”

Timmy Hung said, “It was a really hot day, and I know some of the actors weren’t able to handle the heat. Be careful everyone, and drink plenty of water!”