By natalie on November 16, 2012 in Celebrity Weddings, NEWS 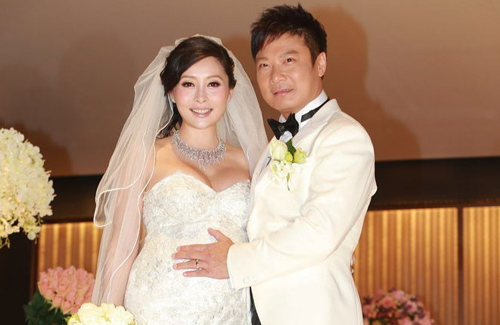 Chin Kar Lok (錢嘉樂) and Angela Tong’s (湯盈盈) wedding banquet was no doubt a star-studded affair. Held last night at the Intercontinental Hotel in Hong Kong’s Tsim Tsa Tsui district, the newlyweds and their bridal party enjoyed the traditional “open door games” prior to the banquet. While playing the open door games, the bridesmaid did not let Kar Lok into the hotel room until he professed his love for Angela, during which Kar Lok got emotional and had to clear his throat several times during his speech. Bridesmaid Emily Kwan later recalled that it was an emotional moment for everyone involved.

After the fun and games, the couple and the bridal party headed to the lobby for group photos. When reporters asked the newlyweds to kiss, Angela shyly said, “Again? No need!”, but Kar Lok could not help but lean in to kiss Angela on the lips for 10 seconds! He then jokingly said, “I would be lucky if I was buying a house –a big house with a big living room and big bedroom,” implying that his wife has a nice body.

Shortly after, the guests started showing up for the banquet caused a frenzy amongst the reporters. From Eric Tsang (曾志偉) acting as their witness, to King Kong and Kitty Yuen (小儀) as their MCs, to Jacky Cheung (張學友) serenading the newlyweds with his romantic ballads, the who’s-who of the Hong Kong entertainment circuit all gathered to celebrate the joyous occasion.

Other notable celebrity guests included: Aaron Kwok (郭富城) who drove up in his sports car with a custom “AARON” license plate, Jackie Chan (成龍), Yuan Bao (元彪),  Sammo Hung (洪金寶) as well as a slew of TVB artists such as Michael Miu (苗僑偉), Bobby Au-Yeung (歐陽震華) and many others.

Photos of the Wedding Banquet