By jayne on February 3, 2015 in Celebrity Weddings, Hot Gossip!, NEWS 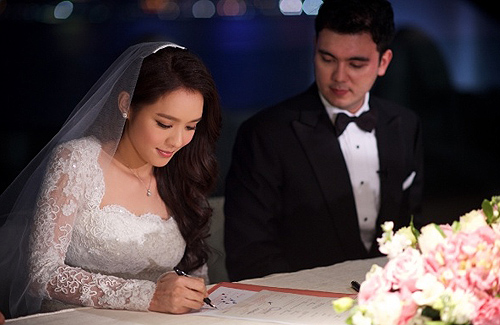 Ella Koon (官恩娜) and boyfriend of six years, Juan-Domingo Maurellet, got married in a low-profile wedding yesterday. Observing traditional Chinese customs, the couple paid respects to their parents in a tea ceremony in the morning, followed by a small, upscale wedding banquet.

While exchanging their wedding vows to love each other for the rest of their lives, the bride and groom both cried. Ella and Domingo thanked their parents for raising them, allowing them to grow up in ideal environments. The couple met through a speed dating event in February 2009. Domingo intrigued Ella with his mixed English, French, and Chinese heritage, as well as his medical background. Domingo works as an anesthesiologist at Queen Mary Hospital in Hong Kong and also has a practicing clinic in Tsim Sha Tsui. His father owned a luxury designer label prior to his retirement, while Domingo’s elder brother is a barrister. The Maurellets own a 10,000 square feet home in southern France, which delighted Ella in an earlier visit.

Last November, Ella revealed that Domingo had proposed during their trip in Paris. Like all brides, Ella felt exhilarated and stressed while planning for her wedding. She is grateful for Domingo’s support and glad that the wedding proceeded as they envisioned.

As their parents did not wish for publicity, Ella did not invite friends within the entertainment industry to her wedding banquet. Her music company, Warner Music, confirmed to the press that Ella’s wedding took place yesterday and the couple is already on their honeymoon in France, where Domingo was born and raised. Despite the haste in which her wedding took place, Ella’s representative denied that Ella is pregnant.

“I know that many friends in the media are interested in the details of our wedding.  However, to respect our parents’ wishes, we wanted to keep our wedding low profile and did not invite the press to attend. I hope everyone understands,” Ella said.

After marriage, Ella hopes to continue her music career and make greater strides in the industry.