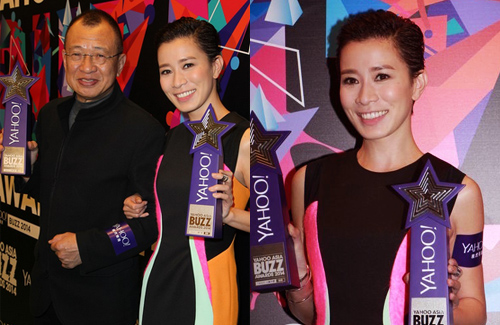 At the Yahoo Asia Buzz Awards 2014, Charmaine Sheh (佘詩曼) and Benz Hui (許紹雄) were the recipients of this year’s Most Searched Television Artistes. Both received a surge of popularity since the broadcast of Line Walker <使徒行者>, which helped them win multiple awards across Asia.

Riding on the success of Come On, Cousin <老表，你好Hea!>, Bob Lam (林盛斌) and May Chan (陳嘉佳) won the Most Searched Onscreen Couple award. Evidently no longer embarrassed about her first onscreen kiss, May surprised the crowd when she gave Bob a kiss on the lips after receiving the award.

Although Andy Hui (許志安) was the recipient of the Most Appealing Male Artiste in Asia and the Most Searched Song of the Year awards, the press was more interested in his marital status than his musical accomplishments.

After a 23-year on-again, off-again romance, Andy and Sammi Cheng (鄭秀文) reportedly got married secretly in Bali, Indonesia in December 2013. Since both guarded their privacy intensely, Andy and Sammi never openly clarified their marital status. At Sammi’s father’s art exhibition earlier, Andy sent a flower arrangement which was shockingly addressed to his “father-in-law”.

Andy dodged the rumors and indirectly admitted to his marital status. He said, “I didn’t think you guys would ask! The art exhibition is a big event [for Sammi’s father]. Since I wasn’t able to attend, I asked Sammi to send a flower arrangement for me. I didn’t ask her what she would write. I just follow Sammi in calling him ‘father’.”

Joey Yung: Life’s Not About Numbers

Joey Yung (容祖兒) discussed the upcoming TVB’s Jade Solid Gold Awards. If she were unable to attend the awards presentation, would it prevent her from breaking the record by winning the Best Female Singer award for ten years? Joey said, “It’s okay if I can’t get the award. I can’t always chase after numbers. There are other things worth pursing in life.”

As well, Joey expressed her wish to concentrate on work and will not be thinking about marriage with boyfriend Wilfred Lau (劉浩龍) at the moment.