To commemorate 25 years in the entertainment industry, Charmaine Sheh (佘詩曼) especially paid a visit to TVB City and visited the historical filming set and makeup studio. As she had filmed at TVB studios day and night during her early career, Charmaine was reminded of her past roles and filled with nostalgia.

Unlike other artistes who had left TVB, Charmaine never complained about her difficult filming schedule. During her visit back to TVB studios, she was filled with gratitude, “I’m thankful that they allowed me to relive my past. The past 25 years have been very happy, and I hope the next 25 will be even happier. I hope to bring even better works to the audience. I love you.” 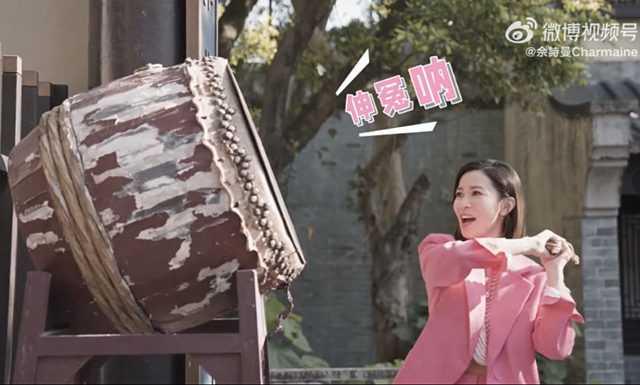 Expressing how quickly time flies, Charmaine wrote on Weibo, “The past few years have been very busy, but it also seems like I haven’t done anything at all. Maybe this is because I’ve been too happy, and it never feels like hard work [other than having to endure the sun while filming]. I’ve never complained, because I really like my work and all of the roles I’ve been given (except for one role). I want to thank everyone who has given me opportunities, the audience for their love, and all the angels who watch over me. Thank you to all of those who have worked with me, thank you for taking care of me and treating me well! Performing has already become a part of my life, so I will continue to act even if you get tired of me! I look forward to the next 25 years, and will continue to flourish with all of you by my side.”

Known as the “Last Big Sister” during TVB’s peak, Charmaine holds the record for the most awards won at the Anniversary Awards with 11 awards to her name.

Charmaine is well known for her loyalty. Although she earns over 100 million Chinese yuan per year, she is ready to film for TVB again if she comes across a great script. She also has many friends in the industry, and has helped many people in the industry before such as Annie Man (文頌嫻), Catherine Chau (周家怡), Akina Hong (康華), Huang Xiaoming (黃曉明), and Alex Fong (方力申).

Forced to Mature as a Child: Charmaine Sheh Didn’t Have an Ordinary Childhood

Charmaine Sheh on Ageism in Dating