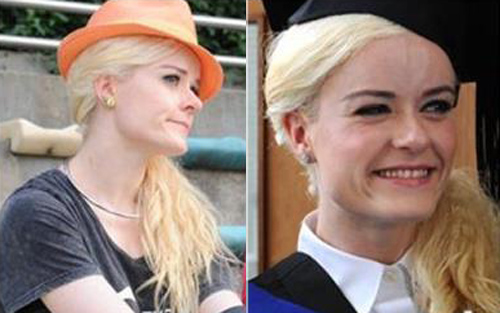 TVB’s new prime-time television drama, Inbound Troubles <老表，你好嘢>, is full of fun and fresh surprises. Although the light-hearted drama has accumulated over 70 complaints due to its “derisive” portrayals of both mainland Chinese and Hong Kong people, the drama is nonetheless critically praised for its carefree filming style, laid-back humor, and refreshing cast.
Caucasian actress, Corinna Chamberlain (陳明恩), is one of the many up-and-coming rising stars of Hong Kong that has attracted widespread media attention due to her starring performance in Inbound Troubles. Corinna portrays Ng Tsz Ching’s (Ivana Wong 王菀之) crybaby best friend and university classmate, Nip Siu Sin.
As an ethnic minority in Hong Kong, it is difficult to catch up in an entertainment circle that is dominated by Asians. It took Corinna many years of street performances and auditions in order to get noticed by a talent agent.  It was also Corinna’s impeccable ability in speaking Cantonese that put her in the center of public interest.
The 31-year-old is born and raised in Hong Kong. Her father, who is from New Zealand, and her mother, who is from Australia, immigrated to Hong Kong in the late 1970s to work as missionaries.
Corinna is a graduate student at the Hong Kong Academy of Performing Arts, majoring in musical theater and dance. She worked as a backup vocalist for Sandy Lam (林憶蓮) in her 2007 concert, and has had many duet performances with William So (蘇永康). Corinna is also a jazz dance teacher for many grade schools in Hong Kong; some of her interests include street jazz, lyrical jazz, pop jazz, and modern jazz.
Inbound Troubles, however, is not Corinna’s first television drama. After signing an artist contract with TVB in 2008, Corinna has made guest performances in the 2008 season of sitcom Best Selling Secrets <同事三分親>, 2009’s You’re Hired <絕代商驕>, 2010’s Every Move You Make <讀心神探>, and 2012’s Silver Spoon, Sterling Shackles <名媛望族>.
Corinna will also be prominently featured in the upcoming period drama, Detective Columbo <神探高倫布>, portraying Ngo Ka Nin’s (敖嘉年) wife.
Source: ihktv.com
This article is written by Addy for JayneStars.com.