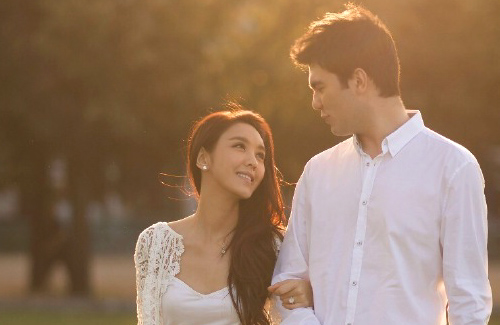 Ella Koon (官恩娜) revealed that she has been engaged to her boyfriend of six years, 32-year-old doctor Dr. Juan-Domingo Maurellet. “I’m happy to announce that we are engaged!” Ella wrote on her Sina Weibo blog after sharing their engagement photos from Paris.

Juan proposed to Ella with a five-carat diamond ring right before they left for Paris earlier this year. Wearing her $500,000 HKD diamond ring to a function on November 8, Ella recalled happily, “He knelt down before me. I thought he was joking at first because he always did that to play around. I didn’t know he was serious until I saw the ring.” Ella said she has never been so happy in the 35 years of her life. “It’s very sweet to finally know how it feels like to be proposed to and become someone’s wife!”

Ella did not reveal the date of their upcoming wedding, but confirmed that it will not be this year.

Juan, with mixed English, French, and Chinese heritage, studied at the Royal College of Surgeons in Ireland and graduated in 2005. He became a member of the Medical Council of Hong Kong four years later and is a general practitioner.

Ella and Juan met at a Valentine’s Day event in February 2009. Juan heard that Ella, who was endorsing a speed dating matchmaking company at the time, was looking for a potential partner. He personally wrote a letter to Ella to ask for a meeting. The company’s program creator, Violet Lim, disclosed in an interview that ten single men were lined up to meet Ella before the company decided to choose Juan. The two immediately clicked after having their first lunch together and their relationship was discovered by the paparazzi in June 2009.

When Ella met Juan in 2009, she already considered him to be her marriage partner. “He’s very filial and gets along with my family really well.”