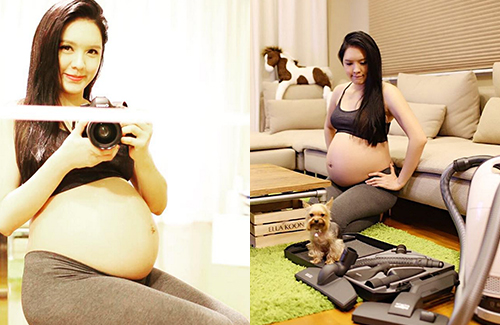 In the past few weeks, 36-year-old has been updating her fans with belly shots, which she uploaded on Instagram. The singer likes to observe the progress of her baby’s growth, taking a new belly shot every week. Carrying a baby boy, Ella shared that she is carrying a big baby, and will be at least 8 pounds at birth.

Yesterday, the very-pregnant Ella uploaded a picture she took with her dog. Ella said her dog enjoys hoarding things into his bed, including the vacuum cleaner. Ella wrote, “I scold him…he pretended to not hear and wouldn’t leave. But from the look of his eyes I can tell that he feels guilty!”

Wearing only a sports bra and yoga pants, the mother-to-be is putting her belly on full display. Ella wrote, “I know you guys will ask me if I usually dress like this at home, but I’m dressed like this because I just took my weekly belly shot!”