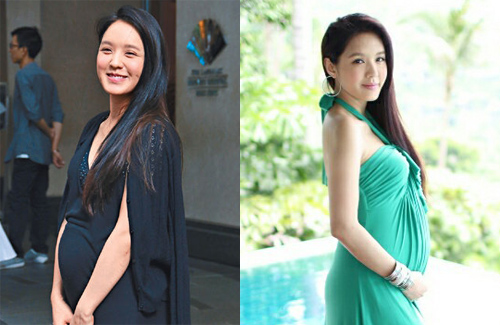 Married since February, Ella Koon (官恩娜) is currently five months pregnant. At a promotional function, she revealed that her baby boy is larger than usual and has long arms and legs based on ultrasound images. Although Ella initially hoped to give birth naturally, she will consult her doctor over alternative plans.

Last week, Ella was spotted in Central dressed in all black and wearing a pair of running shoes. She and another pregnant friend met for high tea on the third floor of The Landmark shopping center. The two women shared a sandwich and sipped orange juice. They continued to chat for a long time even after they finished eating.

Ella appeared to be very engaged in the conversation and made several hand gestures while speaking rapidly. She seemed to be nagging her friend about something, since her face was full of different expressions. After their chat, Ella waited near the door outside to be picked up by a driver. She smiled as she spotted nearby reporters and happily responded to all their questions.

When asked about her pregnancy, Ella revealed it has been a smooth ride so far. “It’s been pretty good! I never threw up,” she expressed cheerfully. In order to ensure a healthy diet, she has stopped consuming cold food and drinks.

1 comment to Ella Koon’s Baby is Larger Than Usual