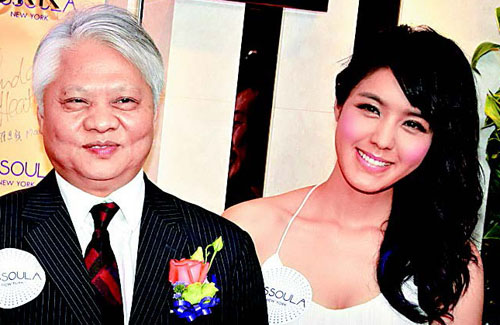 Known for courting controversy, Ella Koon‘s (官恩娜) father, Koon Yau Kuen (官有權) was maliciously defamed by posters put up all over Mongkok by an anonymous person. A magazine alleged that Yau Kuen has filed for bankruptcy, having shut down nine out of his seventeen companies, including the jewelry business that was named after Ella.

Known for being the “Pearl King” in Hong Kong, Yau Kuen allegedly owned diamond mines. Nevertheless, it appears that Yau Kuen’s fates have dwindled in recent years – with the closure of several of his companies and the large debts that he owes other parties.

In response to all these allegations, Yau Kuen responded, “Recently, there have been many defamatory rumors concerning me. I believe those who are wise will take these rumors with a pinch of salt. I have asked my lawyers to handle this. I would like to thank all my friends who have sent me messages of encouragement or spoken up to defend me. Thank you very much!”

Yau Kuen subsequently addressed the specific allegation that he had shut down more than half of his companies, “As for the report that many of my companies have been closed, the reason is that I frequently support many passionate but cash-strapped individuals with their endeavors. I will contribute financial support, and they will contribute their experience. However, from a business perspective, if it is not making profit, I have to cut my losses. In the future, I will continue to support people who are passionate and have good ideas. Now, on my companies that are still operating, there is a company that owns millions of square feet of land in Hong Kong, and I’m waiting to develop the land. As a jewelery merchant, I initially did not see the need to speak up and dispel all the rumors. But I have seen how Li Ka Shing (李嘉誠) responded to being accused of disloyalty to his country. He made some public statements to rebut the accusations. I thus decided to model my response after his.”