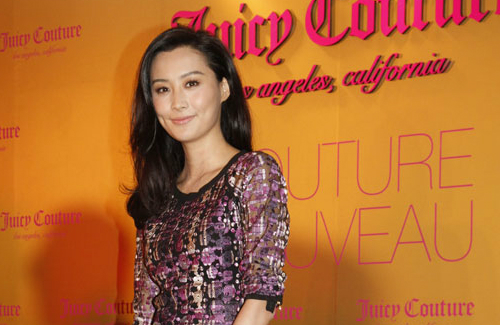 It has been a long time since 33-year-old Fala Chen (陳法拉) made her last press appearance in Hong Kong, as she had been busy taking an acting course in the Unites States and filming in Mainland China. Today, the actress attended a Juicy Couture function for its new fall and winter collection.

Lately, Fala has been lessening her workload in Hong Kong as much as possible, and has no plans to film any local dramas. Speaking of the film she is currently working on, Fala expressed, “There has been new plans, but I can’t reveal them yet. It’s a special character. I’ll return to Hong Kong more often next year.”

When asked for her opinion on Myolie Wu’s (胡杏兒) leave from TVB and the possibility that Kate Tsui (徐子珊) will also not be renewing her management contract with the station, Fala commented, “I was unaware of the reports and don’t know the details!” She added that TVB occasionally sends her drama scripts, but she will not consider filming any television series in the meantime.

Earlier, Fala’s ex-husband Daniel Sit (薛世恒) was rumored with singers Cathy Leung (梁雨恩) and Yu Chiu (趙頌茹). Fala expressed, “I have to look forward! As friends, we contact each other occasionally and I hope he is happy!” When asked if Fala has questioned Daniel about his current relationship status, Fala exclaimed, “I wasn’t in Hong Kong and was very busy. We never met up! I hope he finds a good woman, because he’s a good man!”

Fala added she is currently still single, although she is not lacking pursuers. She remarked, “The most important thing is fate!”