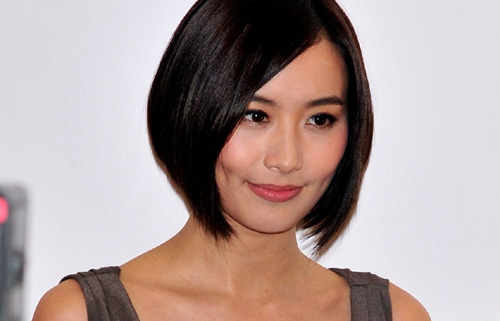 At the 2011 TVB Anniversary Gala, Fala Chen (陳法拉) wore an evening gown which revealed her bare back and $16 million HKD in jewelry sponsored by Emperor Jewellry and Watch. At the event, Fala confirmed that she suffered paralysis on the left side of her face and will return to the United States to rest for a period of time.

Fala said, “It was my body’s way of sending off an alarm. Due to my current filming schedule, there was no time to see a doctor. I have not been feeling well over the last two months.  I have problems with the trigeminal nerves, which may be triggered by stress and tension.” (Will this lead to severe facial paralysis?) “That is what the doctor said may occur. As an artist, we depend upon the face for our income. I have been taking painkillers for the time being and waiting for The Palace Scheme of East and West <東西宮略> to finish filming in the next two weeks. I will take one month off to rest in the United States afterward.”

Placing priority in her health first, Fala sighed and noted that she had to bail out of acting in Prominent Family <名媛望族>.  After her condition improves, she will return to Hong Kong to film Triumph In The Skies 2 <衝上雲霄2>.

Jayne: Hope Fala takes care of her health first. It sounds as if there is not much she can do for her condition aside from resting more.

33 comments to Fala Chen Suffers Facial Paralysis; Will Take Hiatus From TVB and Rest in USA