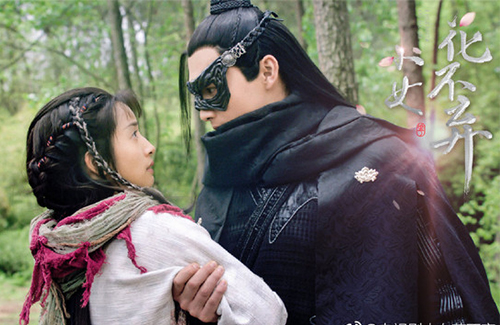 Due to various audio production concerns and to compensate for different regional dialects, it has become common practice for Chinese dramas to dub their actors. Even some of China’s most famous TV stars, such as Yang Mi (杨幂) and Dilireba (迪丽热巴), would get the dubbing treatment.

It then came to a fortunate relief for fans when they heard Vin Zhang’s (张彬彬) natural voice in the Chinese drama Legend of Hua Buqi <小女花不弃>, which also stars Ariel Lin (林依晨). The series is based on the book of the same name, which centers on an orphan girl and her relationship with a mysterious masked man.

“Finally it’s not dubbed!” said a netizen. “His natural voice sounds too good!” Another said, “He sounds so good, so welcoming, and so real.”

Ariel’s voice was also not dubbed.

Vin, who has starred in dramas such as Eternal Love <三生三世> and The King’s Woman <秦时丽人明月心>, is known his “bad boy” portrayals, but his role as Chen Xian / Lian Yike in Legend of Hua Buqi marks an image change for the 25-year-old, who plays a couple with 36-year-old Ariel. Despite being 11 years apart, their age gap is not noticeable at all, and the onscreen pair manages to find their chemistry.