Completing filming for Modern Dynasty <家族榮耀> in China, Him Law (羅子溢) immediately rushed back to Hong Kong to spend time with his daughter during Lunar New Year. Receiving a large eight-figure sum to film producer Tommy Leung‘s (梁家樹) drama, Him and Tavia Yeung (楊茜堯) had to leave their daughter in their family’s care while filming which made them feel very anxious.a

Leaving Hera Behind Was Tough

Aside from seeing their daughter Hera on FaceTime every day, the couple had an unusual way of checking on their baby’s health. “My wife asked my mother-in-law to send photos of our daughter’s poop every day, so we can check to see if she is healthy. Mothers are like that– now my chat log with my mother-in-law is just photos of poop,” Him revealed when he spoke with Dodo Cheng (鄭裕玲) on radio talk show When I was Young I Listen to the Radio <口水多過浪花>. 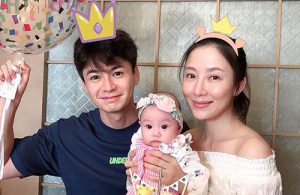 As this was Tavia’s first drama after giving birth, she was very anxious during their separation and hesitant to take on her next filming project. “She really missed our daughter during our time in China. We usually filmed 12-hour days, but Tavia would agree to 14 or 15 hours of filming because she wanted to finish everything as soon as possible. The sooner she could return to Hong Kong, the closer to happiness she would be,” Him said.

Finally reunited as a family, Hera did not recognize her parents at first. “My daughter just looked at my wife in confusion! However, Hera was able to quickly recognize Tavia, as they’ve spent a lot of time together and she is used to her smell.”

Him will dedicate all his free time to Hera until his next filming job. “I will probably start working again in two to three months, and there may be travel requirements. I will focus on jobs in Hong Kong and China. I feel that opportunities for Hong Kong artistes are quickly diminishing. Therefore, we should not only focus on China, but also try Southeast Asia. We need to be proactive because the competition is very fierce now.”

Many questioned whether it was a good idea for Him and Tavia to change their Cantonese names, as they already spent over 10 years establishing their reputations behind their names. When Dodo commented that she is still not accustomed to their new Cantonese names, he revealed the reasons behind the change, “Originally, we wanted to find a feng shui master to pick out a Chinese name for our daughter. He chose a name that we really liked, but her fortune would be even better if Tavia and I changed our names as well. We considered the consequences, but our daughter is the most important to us. We can treat our new names as a gift from our daughter. I believe this is fate. We have a very relaxed attitude towards our names, and it doesn’t matter what you call us.”

When asked if they plan to add to their family, Him wants to leave it to fate. “Even my daughter’s birth was due to fate. We had originally planned for pregnancy [earlier], but it only happened once we relaxed.”