How Charmaine Sheh’s Mother Was Her Inspiration to Succeed 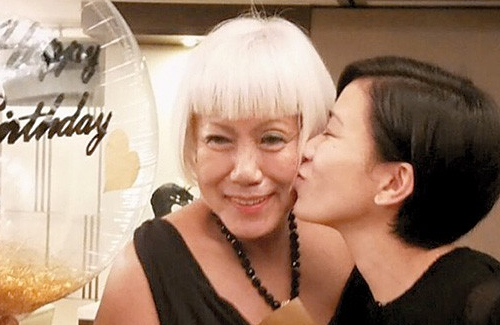 Charmaine Sheh (佘詩曼) is known for being not only one of the highest-paid actresses to debut out of TVB, but also one of the most filial daughters in the industry.

And that shouldn’t be a surprise. The 43-year-old bled sweat and tears to achieve the success she’s gotten today, and a lot of that was out of filial devotion to her mother, who single-handedly raised Charmaine and her two brothers on her own.

Charmaine’s family came across a huge challenge when she was only five years old—her father suddenly passed away from a fatal car accident, leaving behind Charmaine, her older brother, her mother, and a younger brother who was not yet born. Charmaine’s mother fought tooth and nail to raise her three children by herself. Reports say that Charmaine understood this concept at a young age, and would always spend time with her mother, including staying in the same bedroom, so she could be her mother’s emotional support. When Charmaine grew older, her mother managed to save enough money to send Charmaine to Switzerland for her college studies.

When Charmaine returned to Hong Kong, she reportedly took up a job as a beer girl so she could help her mother with the family’s finances. Her decision to apply for Miss Hong Kong 1997 was also for her mother.

In an older interview, Charmaine shared a story that had completely changed her life — in 2006, her mother was staying in the United States for a cardiothoracic surgery. Her mother went into sudden cardiac arrest, in which her heart stopped beating for 20 seconds. At the time, Charmaine was in Beijing for an awards ceremony; upon hearing the news that her mother may not wake up ever again, Charmaine felt a pang of guilt and regret — she felt that she had not been fulfilling her duty as a filial daughter.

That was a wake-up call for Charmaine. She became eager to work even harder so her family would no longer have to bear financial burdens. After leaving TVB, Charmaine continued a lucrative career in the mainland market and the Hong Kong film industry. As one of Hong Kong’s highest-paid television actresses, Charmaine was on the list of Forbes’ China Celebrity 100 List in 2011. She recently gifted her mother with a house worth HK$25 million, a new car, and an additional HK$1 million in cash on Mother’s Day. Charmaine’s mother has been seen traveling overseas with close friends, living a comfortable life.