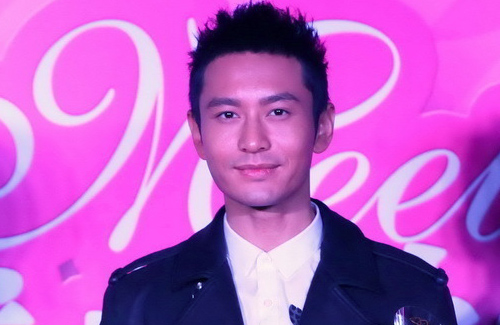 Popular mainland actor, Huang Xiaoming (黄晓明) will lead the 2012 winter break season with two epic Chinese period films – The Guillotines <血滴子>, to be released on December 20, and The Last Tycoon <大上海>, to be released on December 22. Having filmed over 10 movies in the last two years, Huang Xiaoming has now become one of China’s top-earning film actors.

But being a prolific actor comes at a price. The more Xiaoming worked, the weaker he became. “I have already struggled for more than 10 years,” stated Xiaoming. “I have only one advice for everyone: life is harsh, and no one is the exception. Being first place in anything does not exist. There is only first place in effort.”

Xiaoming’s road to stardom was not an easy one. For many aspiring actors, it was the lack of luck. For Xiaoming, it was the car accidents.

The 35-year-old Qingdao native had his first car accident a week before he applied for the Beijing Film Academy. A jeep ran over his toe while Xiaoming was crossing the street.  He arrived at the entrance examination room with a bad limp, sending off a terrible first impression to the Beijing Film Academy faculty. Surprisingly, Xiaoming passed the entrance examinations successfully.

His second car accident was a few weeks before his graduation at the Beijing Film Academy. While Xiaoming was on his way to a film studio, a large pickup truck crashed into his own smaller vehicle. Xiaoming was trapped inside his car, unconscious, and the firemen had to break into the glass windows to pull him free. The glass shards inside Xiaoming’s cheeks were not removed until eight years later.

Xiaoming’s third accident was during his birthday. While filming for a car crash scene, the driver lost control of the vehicle and Xiaoming, the passenger, flew out of the car.

The fourth accident was during a road trip from Yinchuan to a film studio in Inner Mongolia. The crew came upon an unexpected steep slope on the road and the car flipped. Xiaoming pieced together a broken mobile phone and made an emergency call. His female assistant, who was the most injured, was rushed to the hospital.

When the doctor informed Xiaoming that his assistant was fine, the actor let out a deep sigh. “She’s fine, that’s great. Now check me, I am in so much pain!” The doctor found that Xiaoming had several broken bones in his neck.

In May 2012, Xiaoming suffered a serious injury while filming for the 3D wuxia film, The Bride With White Hair <白发魔女传之明月天国>. The wire that lifted Xiaoming snapped, and he landed on his left leg.

“At the time, I felt very light,” Xiaoming mused as he tried to recall his injury. “And then the wire snapped. My first reaction was, ‘What? I can’t be that unlucky!’ After that, I heard a loud ‘pong’ and I fell onto the ground. All of this happened around one to two seconds.”

Xiaoming said he is very used to being injured. When he was rushed to the hospital, he did not feel an ounce of anxiety or worry. He expressed that it was not pain that he felt, but fear that he would be impeding the film crew’s plans and the filming schedule. “I didn’t dare to think about how the rest of the film crew must had felt when I was down,” said Xiaoming. “What were they going to do?”

While Xiaoming was recuperating in the hospital, he only had one thought in mind – to heal as fast as possible. “[The doctor] told me to keep my foot leveled high. It must be at an angle higher than where my heart is, so the bones of my foot would grow and heal faster. I would listen to every order that the doctor gave me. I really wanted to heal faster so I could get back to work sooner.”

Because of his injury, Xiaoming was unable to actively promote The Last Tycoon in China. Nonetheless, Xiaoming kept up with the promotional spirit by being active on Weibo, urging his fans to support the film and kept everyone else updated regarding his situation. Xiaoming’s perseverance and optimism gave him the name “Iron Man” by his fans.

“I’m no Iron Man,” said Xiaoming with a laugh. “I like the name ‘Iron Rod Man’ more. I do have four iron rods and two iron needles in my body right now. I don’t think a typical human being is able to accomplish this, haha! I also wish to be just like an iron rod – to never let go of the hammered target.”

Reduce the Workload… In a Few Years

Xiaoming admitted that he has once considered reducing his workload so he could “recharge his batteries” and spend more time with his family. “My manager and I once had these plans. For example, we considered taking the entire next year off, so I can study in the United States. To be honest, what I really wish for is to spend more time with my family, but I just cannot stop with the work.

“I suppose being busy all the time is not all that bad. If I didn’t get sick all the time, I wouldn’t be able to come up with enough excuses to spend more time with my family. I think the phrase ‘misfortune brings luck’ applies to me very well!” Xiaoming added with a smile.

After a long discussion with his manager, Xiaoming decided to forgo his hiatus plans… for now. “I still do not think I’ve done enough. I still need to work harder. Now that I am still young, I should use this chance to work even more in the next few years.”

Xiaoming explained that although his risky work habits have given him losses, he does not regret his decision. “I have already struggled for more than 10 years. Zhang Jingchu (张静初) once told me, ‘You are so handsome. You don’t need to work so hard!’ But I understand how the system works. If it wasn’t for my hard work and effort, I would not be where I am today, and more work still needs to be done.  I have only one advice for everyone: life is harsh, and no one is the exception. Being first place in anything does not exist. There is only first place in effort.”