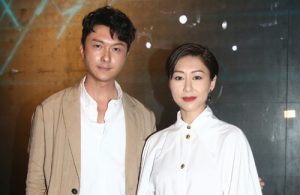 Portraying a police officer in the investigative unit, Vincent’s character is very reckless. There will be many dangerous scenes, including jumping from the fifth floor of a building. He will try his best to film all the scenes without a stunt double, but it will depend on the situation. “Usually, it is pretty safe with wirework–it’s just scary for me.”

This will be Nancy’s first drama since joining Shaw Brothers, and she will have to wear a prosthetic limb. This character is the most sad and painful one in her career, and will have a lot of intense emotions. She had already cried when reading the script.

As they are filming during the summer, Ron said he would end up sweating through his suit anyway. When reporters jokingly asked if he sweats through his underwear as well, Ron retorted that he usually does not wear underwear. As he sprained his wrist from an earlier movie, Ron is grateful he does not have any action scenes in ICAC Attack.

Simultaneously filming TVB’s ICAC Investigators 2022 <廉政行動2022>, Sisley confessed she feels a bit confused as her character in ICAC Attack is quite similar. “When reading both scripts, I end up mixing up the characters and cases. I need to use different techniques to help differentiate the two dramas, but it’s been going well since the start of filming.”

In ICAC Attack, Sisley’s character will have a deep impact on Bosco’s character, helping him let go of the past and come to terms with the situation. “My character is a bit of an out of the box thinker and is someone that helps mediate the team atmosphere.”

Although her characters are similar, they different in image styling. Her appearance will be more tomboyish in the TVB drama, while she will be more carefree in the Shaw Brothers drama.