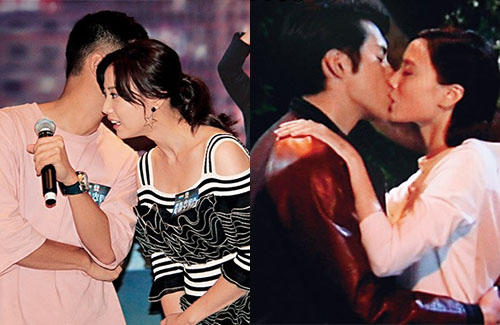 Insiders of the TVB drama A General, a Scholar, and a Eunuch <超時空男臣> are claiming that their stars Rebecca Zhu (朱晨麗) and Matthew Ho (何廣沛) are dating—and have been dating for about six months.

The TVB time traveling comedy—which ended its run on August 27th—stars Matthew as Siu Tung, a young Ming dynasty eunuch who travels to the future alongside a general (Edwin Siu 蕭正楠) and a court scholar (Raymond Cho 曹永廉). In present day Hong Kong, Siu Tung falls in love with Cat (Rebecca), a business woman, who reciprocates his love. General, Scholar, Eunuch is not only winning in word-of-mouth, but also in ratings, and some say Matthew is set on being one of TVB’s future siu sangs.

According to insiders of the show, Rebecca and Matthew grew very close on the comedy drama set. One source said, “Matthew was a bit shy at first, but Rebecca was very cute around him. The two of them liked to whisper to each other a lot. It was kind of obvious about what was happening!”

Their alleged relationship was apparently an open secret among the cast. Matthew’s costars Edwin and Raymond even teased him about Rebecca during a live broadcast to promote the show. They said, “How come Rebecca Zhu could make Matthew Ho buy breakfast for her? When we tell you to do the same, you just ignore us!” Whenever someone among the cast mentioned Rebecca’s name, Matthew would turn shy.

Some sources have also said that they have seen Rebecca and Matthew meeting up in private. Matthew once mentioned in an interview that he and Rebecca share the same interests, which was what got them to warm up to each other so fast.

Rebecca once said about Matthew, “He’s actually quite mature and manly. He is especially serious about his career. He would do his homework and research before starting work. This is why he was so convincing in his role.”

Matthew once dated Ice Chow (周梓盈), his 2012 acting class classmate. They reportedly dated for five years before splitting. It’s been said that the split was due to Matthew’s busy schedule.