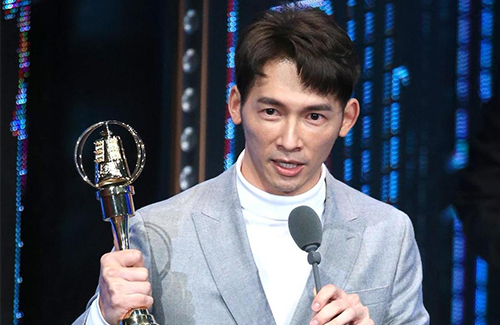 Five-time Golden Bell nominee James Wen () didn’t expect anything when he stepped foot into the National Dr. Sun Yat-sen Memorial Hall on Saturday. He had just returned from Paris the day before, and was still going through horrible jet lag at the night of the ceremony.

When he received Best Supporting Actor for his performance in HBO Asia’s The World Between Us, James was in a minor shock. After five years and five nominations, James finally won.

“I apologize,” said James once he stepped on stage. “I wasn’t expecting to win. I’m not saying this just to be polite. It’s because you guys are all amazing. I spent all night yesterday thinking that if I do get the opportunity to step onto the stage, I’ll definitely be the more lucky one.”

The 41-year-old made his acting debut in 2001, but his career did not kickstart until 2006, when he started playing bit roles. He rose to prominence after starring in 2006’s Dangerous Mind <危險心靈> as the math teacher Mr. Zhan. Back to back successes with 2009’s My Queen <敗犬女王> and The Fierce Wife <犀利人妻> promoted James to leading actor.

TAGS: Golden Bell Awards, James Wen, The World Between Us