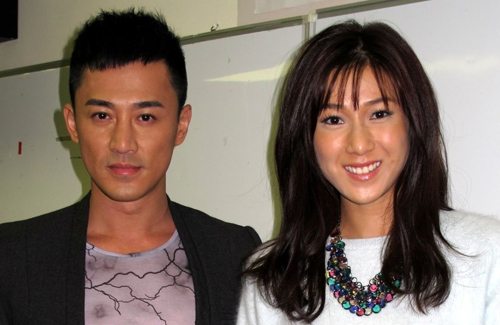 Following 2011’s My Sister of Eternal Flower <花花世界花家姐>, Charmaine and Raymond will return onscreen as a romantic couple in Time of Love. Their portion of the story is set in the busy city of Singapore, where Raymond’s character develops a crush on his office boss, portrayed by Charmaine. Since this is not the first time the two are collaborating together, they believe there will be great chemistry sparks.

Meanwhile, Kate will be working with Taiwanese actors, James Wen (溫昇豪) and Chris Wang (宥勝). The trio will begin shooting for the drama in Malaysia on Christmas day. Their storyline will be the most tragic of the four, speaking of an entangled triangle love relationship. Kate’s character suffers from amnesia after a car accident, and will have numerous crying scenes. In fact, it was revealed she would be devoid of makeup for the entire series.

Currently broadcast drama Bounty Lady <My盛Lady>, which stars Kate, is generally well-received by the audience. Speaking of her chances at the upcoming TVB awards ceremony, Kate said optimistically, “If I don’t receive an award this year, there’s still next year, and next next year!” Both Kate and Charmaine expressed support for Linda and Krystal Tin (田蕊妮) in getting this year’s TV Queen award.

In Time of Love, Linda will once again deviate from her usual roles to portray a stereotypical Hong Kong woman who is greedy for money. Her annoying yet funny character serves as another fresh challenge, besides her anticipated performances in Tiger Cubs 2 <飛虎II> and The Apothecary <大藥房> to be aired next year. Linda will be shooting in South Korea, partnering up with local actor Yeon Jung Hoon (延正勛).

The fourth love story takes place in Japan, starring Wong Cho Lam, Aaron Yan (炎亞綸) from Fahrenheit, and Japanese actress, Naomi Watanabe (渡邊直美). Cho Lam portrays a cartoon-style old man who helps interpret the minds of lovers. He expressed his excitement in the new drama, since it is his first time playing such an interesting character. Filming in Japan will start in January, and Cho Lam’s girlfriend, Leanne Li (李亞男), will be tagging along. Asked if Leanne is going to keep an eye on him, Cho Lam replied, “Actually, she likes Aaron. I’m the one who’s going to keep an eye on her!”