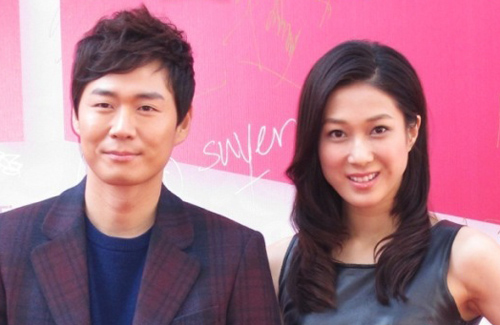 TVB’s Lunar New Year film series A Time of Love <愛情來的時候> held its premiere on January 22. Stars from all four story arcs gathered in Hong Kong to celebrate their $10 million HKD effort. TVB’s Linda Chung (鍾嘉欣) and South Korean actor Yeon Jung Hoon appeared at the event to discuss their filming experiences. Known to be a big fan of Korean pop culture, Linda also took the opportunity to show her admiration for her co-star by showering him with praises and addressed him with a flirty nickname.

Linda and Yeon Jung Hoon star in the film’s third story arc which will air on February 9. Linda plays a young woman from Hong Kong who is determined to live with her boyfriend in South Korea. She hires part-time Korean instructor King, played by Yeon Jung Hoon, to study the language. King at first disapproved of Linda’s spoiled attitude, but over time learned to love the soul underneath.

Aside from dealing with the snowy and cold Korean weather earlier this month, Linda and Yeon Jung Hoon must also overcome language barriers. As the only person with Cantonese lines, Linda had to mostly rely on body gestures to cue her co-stars. Things were much easier off the set however. She had no problem at all communicating with Yeon Jung Hoon in English, which was likely a blessing since she was unable to retain most of the Korean she learned during the production.

Full of appreciation for her co-star, Linda openly praised Yeon Jung Hoon’s talent and his good looks. In a good mood, she even started calling him “Fun Fun”, the Cantonese pronunciation of “Hoon”, in front of the press. Yeon Jung Hoon initially expressed surprise by his new nickname, explaining that Koreans prefer to address each other by polite titles. Even so, he feels that it is a friendly gesture and finds this difference in culture refreshing.

Other stars in A Time of Love, Charmaine Sheh (佘詩曼), Kate Tsui (徐子珊), Kenneth Ma (馬國明), James Wen (溫昇豪), and Wong Cho Lam (王祖藍) were also present at the premiere. Although James was unaccustomed to the 20-hour filming schedule from TVB, he enjoyed working with Kate and hopes to partner with her again.