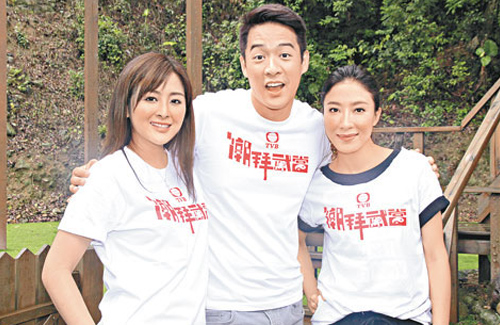 Joking that he was afraid of Tavia’s boyfriend Him Law’s (羅仲謙) jealousy, Jason exclaimed, “Of course, I’m scared! He’s so buff! But this was the director’s request!” Since Jason has never worked with Tavia before, he felt awkward during the scene. Asked how intimate the scene is, Jason said, “I’m topless and we hug on bed.” Jason’s fiance in the drama, Carat Cheung, will catch the pair in bed.

Jason also reported the bed scene to his girlfriend Sarah Song (宋熙年) beforehand. “I told her because I didn’t know how it would go during filming. After the scene, I talked to her about it and she said it was okay.”

Tavia Worried About Old Back Injuries

While this is not Tavia’s first martial arts themed series, old back injuries have been causing her discomfort. Filming tai chi scenes with a back injury, Tavia was initially worried about hurting herself again.

Tavia expressed, “I was worried that my back wouldn’t be able to move because of the injuries, but thank goodness I didn’t get hurt! I really want to send my mom clips so she can learn tai chi, but I’m concerned she will hurt herself. ”