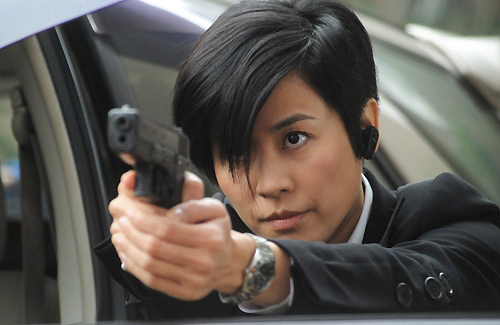 Jessica had numerous outtakes while filming the one-minute clip, as Jessica frequently mispronounced her character’s name in Mandarin. Jessica apologized and laughed, “The first two words of my name have retroflex consonants, so I can’t really pronounce it. The cameraman also gave me only six seconds to say my line. This is even harder than memorizing dialogue!”

The 42-year-old actress admitted that it has been nine years since she has last been to Taiwan, and that she never had a chance to practice her Mandarin since then. Her last visit to Taiwan was in 2003 when she had to promote Square Pegs <戇夫成龍>.

When Jessica came to Taiwan to promote A Step into the Past <尋秦記> in 2001, the crew took her around the streets of Taiwan and introduced her to Taiwanese cuisine and night market dishes. It was an unforgettable experience for Jessica. As Jessica expressed her wishes to try Taiwanese dishes again, a crew member surprised Jessica with a dish of duck tongue, which she immediately devoured. She sighed, “It has been ten years since I’ve last tasted Taiwanese food. I want to try and eat everything!”

Jessica humorously added, “If I can have more chances to come to Taiwan for promotions, I will be able to talk about the lovely food, and I’m sure my Mandarin will improve tenfold!”

Tiger Cubs premiered on Taiwan’s TVBS Entertainment Channel on September 28, and airs five episodes a week. Launched in 1993, TVBS is a subsidiary of TVB that is based entirely in Taiwan. TVBS occasionally produces their own Taiwanese dramas as well, such as Love Contract <愛情合約>, which starred Ariel Lin (林依晨) and Mike Ha (賀軍翔), and I Do? <幸福的抉擇>, which starred Annie Liu (劉心悠) and Blue Lan (藍正龍).

49 comments to Jessica Hsuan Forgets Her Name in Mandarin