Jessica Hsuan (宣萱), Philip Keung (姜皓文), ERROR, Peter Lai (黎彼得) and Angie Cheong (張慧儀) attended the prayer ceremony for upcoming ViuTV original drama <極度俏郎君>. Playing a divorced couple, it is Philip and Jessica’s first collaboration with Cantopop group ERROR, and everyone had such an enjoyable time that they did not want to knock off work!

Philip’s Dog Sniffs Jessica On Him?
Their second collaboration since the movie One Shot <一線生機>, Jessica and Philip shared that they had such a good time on set that it was the first time they could not bear to end work during filming! 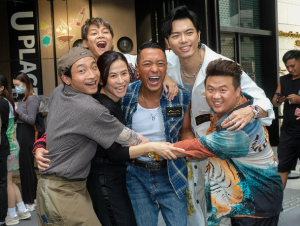 Complaining that 20 episodes was not enough, Philip said, “Everyone got along really well, especially with Jessica around, my entire family loves her and when my dog sniffed her aroma on me when I got home, he immediately leaped over,” Jessica praised the ERROR members as very hardworking, and said that the group’s fans brought plenty of food and drinks on set for the cast. “Their characters and themselves are all very comedic, while my character is more serious, so I was worried my emotions would get swayed by them,”

Jessica Open to Work with TVB 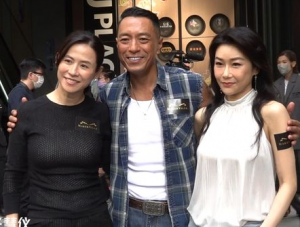 Asked what she felt about her first ViuTV production and what it meant defying TVB, Jessica replied that she did not have too many considerations. “I’ll head wherever there is a good script and good roles, viewership is not something which actors can control,” she said, and added that she remains open to any collaboration with TVB as long as the role suits her. Unbelievably, it is also her first time working with Angie, the two being colleagues back at TVB.

Philip, who was asked about being the initial casting choice for the male lead role in Get On a Flat <下流上車族> (now played by Andrew Lam 林敏驄), said that he had indeed been in talks with TVB back then, and had seen the script but not inked the contract. Praising Andrew for his great acting, Philip said, “I wanted to do a comedy at that time, and TVB immediately came up with a story for me, but in the end I didn’t get to participate, I do feel a little apologetic.”

Sharing that he had liked Angie since he was young, ERROR member Poki Ng (保錡) is happy to have the chance to act opposite her this time.