A familiar face who has fronted many classic TVB dramas, 51-year-old actress Jessica Hsuan (宣萱) recounts how she parted ways with her manager five years ago after the latter deemed her too “fat and old”!

Portrayed String of Confident Women
Proving her versatility in an onscreen career spanning three decades, the actress had a part in some of TVB’s most successful franchise dramas File of Justice <壹號皇庭> series and Detective Investigation Files IV <刑事偵緝檔案IV>, not forgetting period comedy Square Pegs <戇夫成龍> and modern romance My Unfair Lady <不懂撒嬌的女人>, to name but a few.

The accidental actress, who holds a masters in aerospace engineering from Imperial College London, recounts experienced anxieties about hitting the big 3-0 back then. “I felt that I was past my prime, is it time to get married? What should I do…?” she shared, recalling how she teared up and cried for a few moments then.

However, hitting her forties and fifties ironically refreshed her perspectives, as she had the novel feeling that life was only just beginning. Pouring her heart out on talkshow Lu Yu You Yue <鲁豫有约一日行>, it dawned on Jessica that reaching forty was a great new beginning for women.

The big fifty was another milestone she had somewhat dreaded — that was, until the very eve of her birthday. While she had put her career at the top of her priority list all along, she felt that she could finally slow down to appreciate everything she had accomplished so far, and really “look forward to enjoy(ing) life”. 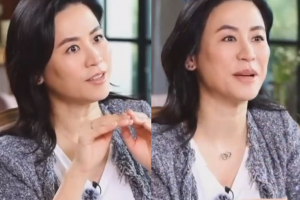 Talent-spotted by chance, Jessica had became an actress after signing on to TVB, and counts herself lucky that she still enjoys her job very much, even after thirty years.

Recounting an episode five years back when she was 46, she was told by her artiste manager that she was getting “old and fat” and advised to find another job. “My voice turned low, and I asked her, ‘For sure?’ But very quickly, I looked into the mirror at home, and (thought to myself), ‘it surely isn’t that bad!’” Feeling confident about herself, the actress made the decision to terminate her contract with the said manager instead.

A well-loved onscreen couple, Jessica remains good friends with Louis Koo (古天樂), whose company One Cool Film Production Limited she is currently signed on to. Describing their friendship as “brotherly”, she says he is like a sibling to her. “I treat myself as half a man, and he also treats me as half a man,” laughs Jessica, adding the duo have been supporting each other through the years, and she feels happy that he has been doing great throughout these years. 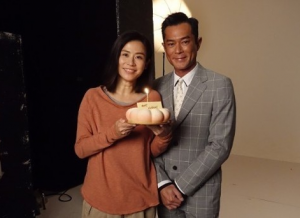