Louis Koo‘s (古天樂) film production company has finally revealed the trailer for the film sequel to TVB’s classic drama A Step Into the Past <尋秦記>. Titled Back to the Past, Louis reprises his role as the protagonist Hong Siu Lung and is joined by the original cast including Raymond Lam (林峯), Sonija Kwok (郭羨妮), Jessica Hsuan (宣萱), Joyce Tang (滕麗名) and Michelle Saram (雪兒). 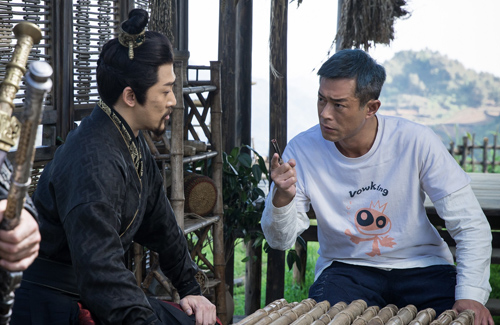 The movie sequel takes place 20 years after Qin Shi Huang has taken power at the cost of a strained friendship between him and Hong Siu Lung. Qin Shi Huang has become a tyrant, and uses his power to achieve his goals and threatens to kill those who oppose him.

Meanwhile, Hong Siu Lung has settled down in the country-side with his family, but he is pulled back into conflicts with the emperor. As seen in the trailer, Qin Shi Huang does not hesitate in using his sword on his former mentor while Hong Siu Lung will have to rely on his knowledge of technologies from the modern world to protect his family. Seeing history unfolds before his eyes, Hong Siu Lung expresses his regrets in playing a role in Qin Shi Huang’s ascension.

Adding to Hong Siu Lung’s problem, a mysterious character named Ken aims to travel back in time to change the past and make himself the emperor.  As Hong Siu Lung juggles between letting history run its course and escaping from Qin Shi Huang’s reach, he is also faced with the task of stopping Ken from creating a paradox in history.

“Back Into the Past” Trailer

Categories: Hong Kong Movie, Hot Gossip!, NEWS
Tagged: A Step into the Past, Back to the Past, Jessica Hsuan, Louis Koo, Raymond Lam