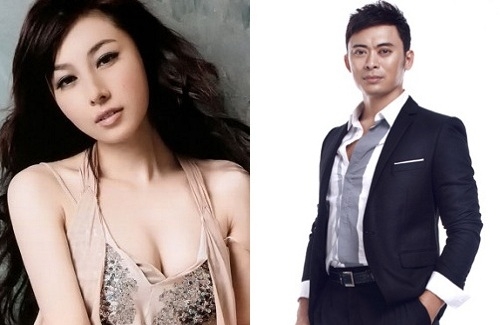 Fans of JJ Jia (賈曉晨) may not be seeing her on the small screen for a while after her brief appearance on “Friendly Fire”.

While JJ was on her way to becoming TVB’s next promoted female artist, unfortunately her reputation was damaged when it was discovered that she was dating Louis Fan (樊少皇), who was not only 9 years older than her, but also had a girlfriend and two children. The news not only cost JJ some work as she was being labeled as a “homewrecker”, but may cost JJ her career as well. Boss Nat Chan (陳百祥) has ordered not to renew JJ’s contract and is interested in signing model-actress Carol Yeung (楊焉) instead.

Without a job on the horizon, JJ has nothing else to do but to spend her time strolling the malls.

Although 39-year-old Louis clarified that he was never married to the mother of his children and that they had separated long before he started seeing JJ, it was speculated that he had another girlfriend in Hangzhou prior to dating JJ. However, JJ did not seem to be worried about her career as she is frequently seen flying to Qingdao to visit Louis.

JJ even admitted that she hopes they can get married soon when she revealed that Louis has proposed to her. “He mentioned it several times and I think it’s about time I seriously consider it. Every time I’m in a relationship, of course I hope it lasts forever, so I am not ruling out the possibility of a wedding in the near future!”