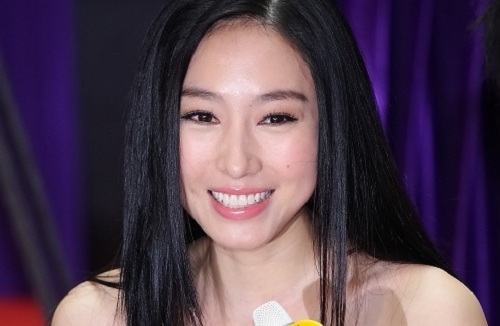 Since announcing her relationship with Louis Fan (樊少皇), JJ Jia (賈曉晨) experienced a bumpy love road. Tabloids claimed that Louis had a wife and two children, and labelled JJ as a home wrecker in his marriage. After Louis clarified through a press statement that he was never married to the mother of his children and that they had separated long ago, tabloids alleged that Louis had a girlfriend in Hangzhou before courting JJ. As a result, JJ was labelled as a “fourth party” in Louis’ colorful love life.

Amidst the negative rumors surrounding her boyfriend, JJ remains trusting towards Louis. She still loves Louis very much and reiterates that he never cheated on her.

JJ Upset in Being Labelled as Fourth Party

Although referred to as a fourth party, JJ’s confidence in Louis has never wavered. Admitting that she was unhappy with tabloids’ reports, JJ said, “I was upset when I saw the reports, but his press statement already clarified that he had a past romance before meeting me. Everyone has a past. I like who he is now and I will tolerate his past. He is an artist, that’s why his past is being dug out. Actually, it’s not that complicated.”

JJ: “Louis Did Not Cheat On Me”

After opening up on her romance with Louis, JJ has been plagued by negative rumors. However, JJ was determined to pick herself up again and she has also learnt to be more tolerant of others.  Emphasizing that Louis did not cheat on her, JJ had absolute trust in him. When asked about her feelings now, JJ said, “Actually, the entire matter does not concern me. It is other people’s matter. I know that he did not cheat on me, and I will believe him.”

Unsettled that her boyfriend was being branded as a love cheat, JJ said, “When I saw that report, I was unhappy. We already explained it so many times, and it is still written this way. Perhaps it was not explained properly and thus everyone misunderstood. The issue will resolve once we clarify properly.”

After tabloids painted Louis as a flirtatious guy, JJ confessed that they did face some setbacks in their relationship. Her friends had also advised her to withdraw from the relationship. Revealing that she had never dated such a man with a complicated background, JJ learnt to persevere and believe in the love she chose.  Stating that Louis is a responsible man, JJ hoped that everyone will give their blessings to them.

“After the incident happened, we only communicated through the phone. He needs to work everyday. To be frank, the entire world called me and warned me to be careful. This is because they are not aware of the entire incident and Louis is also a low key person. Thank you everyone for your concern. Please believe my eyes. I did not fall for the wrong guy.