Joel Chan (陳山聰) and heiress Florinda Ho’s (何超雲) relationship has been nothing but tumultuous for the past two years. Although Joel flew to England in hopes of reconciling his relationship with Florinda, he failed to win back her heart. Joel returned to Hong Kong yesterday by himself.

Joel allegedly divorced his wife, Ponny Yeung, after falling in love with Florinda. He adopted a new lifestyle and left behind old friends, Christine Ng (伍詠薇) and Sharon Chan (陳敏之).  Ever since the start, their relationship has been looked down upon. Joel also abandoned his TVB career, taking frequent vacations and flying to Europe while dating Florinda. Despite being frozen by TVB earlier, he did not show any initiative when TVB gave him a second opportunity. An insider stated, “The film producers couldn’t reach Joel at all. He doesn’t answer his phone, and Derek Kok (郭政鴻) is the only one that can find him!”

This past April, Florinda uploaded a photo and wrote “Love = Money”, causing many to believe that the couple broke up over financial disagreements over their fashion business venture. In the end, Florinda flew to London, England to mend her broken heart. Unfortunately, during her time in London, Florinda contracted food poisoning. Joel immediately flew to London to care for Florinda, in hopes of saving their relationship.

Joel took great care of Florinda during this time period – bringing her to doctors and taking care of her every need. Although several of Florinda’s friends were not supportive of their reconciliation, Florinda slowly warmed up to Joel’s attentiveness. Deciding to give Joel one last chance, the pair eventually continued their vacation and flew to Portugal.

It was rumored that Joel even took this opportunity to propose to Florinda. When Florinda’s mother Ina Chan (陳婉珍) found out, it was said that she tried to get Florinda to return home immediately. A close friend then disclosed that Joel didn’t propose and that Ina never demanded Florinda to fly home.

Despite all the effort Joel has put in, the final outcome has been rather ambiguous for everyone. However, an insider informed that the public might not see them together anymore, indicating that perhaps Joel’s attempts have been futile after all.

Joel arrived at the Hong Kong airport yesterday and was mobbed by reporters. Asked about his relationship with Florinda, Joel remained silent. However, Joel denied that he owed large amounts of credit card debt. He will continue working, although he will not film for TVB temporarily. Asked if he will be investing in a business, Joel said he will make announcements at the appropriate time.

Florinda: “We Are Friends Only”

Florinda updated her Weibo blog yesterday to stop the recent scorching reports. She hinted that she had indeed broken up with Joel, referring to him as only a friend. “My mom sent me a report; when I saw that Mr. Chan was smeared, I felt very sad.  As to the press’ continuous coverage on my personal life, I didn’t feel the need to clarify false rumors before. I am good friends with Mr. Chan in the past and present, and should be in the future as well. I only hope that everyone gives us privacy.” 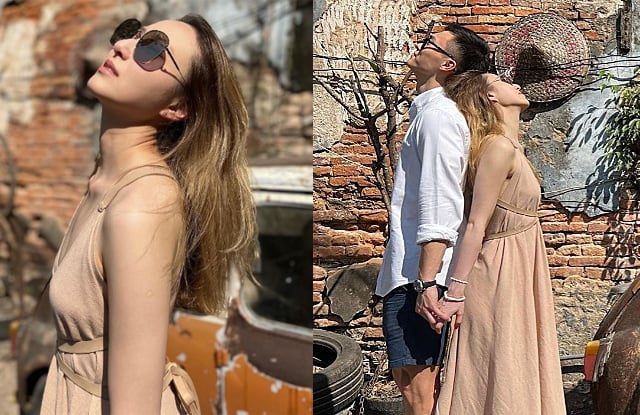 Since her controversial breakup with Joel Chan, the heiress finally entered a serious relationship.