First airing in 1998, Armed Reaction is one of TVB’s most popular franchises and returns to television screens this year. While the new installment Armed Reaction 2021 <陀槍師姐2021> mainly features a new cast, Joyce Tang (滕麗名) reprises her role as Chan Sam Yuen. Throughout the series’ five installments, viewers see the growth of Sam Yuen’s character from a beat patrol officer to a superintendent in charge of the Regional Crime Unit, as well as dramatic changes in her personal life.

Awed by Sam Yuen’s development, Joyce reflects on the happiness and grief her character has lived through and feels nostalgic. “In the history of television, I believe there hasn’t been a character that has gone through so many stages: from [early adulthood], getting married, developing her relationship with her mother-in-law, witnessing the death of her son, and feeling hopeless over the disappearance of her husband. We nearly filmed every aspect of her life. It’s amazing.”

The franchise first followed Sam Yuen’s career where she met her work partner Chu So Ngo (Esther Kwan 關詠荷) and later developed a relationship with senior inspector Ching Fung (Macro Ngai 魏駿傑). Although Sam Yuen and Ching Fung married and had twins, she faced her first life crisis when she was sexually assaulted during an investigation. More tragedy followed with the death of her son and the disappearance of her husband.

In Armed Reaction 2021, Sam Yuen has not completely moved on from her husband’s death, but finds herself attracted to Hanson Mung (Moses Chan 陳豪). The installment also explores Sam Yuen’s relationship with her mother Wong Yee Mui (Mimi Chu 朱咪咪) and her daughter (Maggie Wong 黃美棋). It was said that Joyce personally recruited the child actress for the role in the fourth installment.

The Armed Reaction franchise was an important chapter in Joyce’s career, and the actress shared what the series meant to her, “Armed Reaction is like my child. It’s filled with memories, emotions and excitement. I watched you grow up and make new friends. I hope that you will be happy and continue to be popular.” 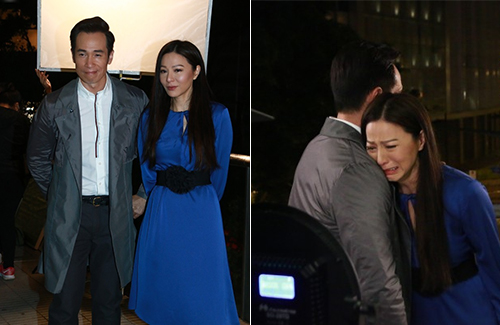