It’s a whole new line-up with a whole new style. The fifth official installment of TVB’s popular police drama series Armed Reaction <陀槍師姐> is finally back, and it’s going to lighten up the Lunar New Year. 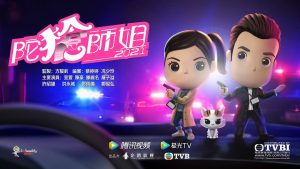 It stars Jessica Hsuan (宣萱) as Diana Tai, an unlucky cop who somehow gets mixed into working with the very unlikable SDU head officer Hanson Mung, played by Moses Chan (陳豪), to solve a series of cold cases. Diana, ironically, has a fear of guns, a phobia she had developed after being held hostage by a criminal.

Armed Reaction 2021 features an all-new cast, with the exception of Joyce Tang (滕麗名), who reprises her role as Chan Sam Yuen from the original drama series.

The new installment begins with the re-introduction of Chan Sam Yuen, who is now a Superintendent of the Special Crimes Unit. She is still struggling to get over the death of her late husband Ching Fung (played by Marco Ngai 魏駿傑 in the previous installments), and drowns herself in her work. She develops an admiration for Hanson, who reminds her of Fung.

Different from the previous four installments, which had bits of humor sprinkled throughout, Armed Reaction 2021 holds itself as a comedy series. The style of humor is exaggeration and meta humor—after being held hostage again, Diana asks, “Do you I look like hostage to you?” referring to Jessica herself playing characters who often get kidnapped.

Armed Reaction 2021 is Jessica’s first collaboration with Moses since 2017’s Line Walker: The Prelude <使徒行者2>. The actress said, “The Prelude was a very serious show. This one isn’t. Moses’ face just makes me laugh now. Honestly, I haven’t committed this many NGs since Old Time Buddy <難兄難弟>.”