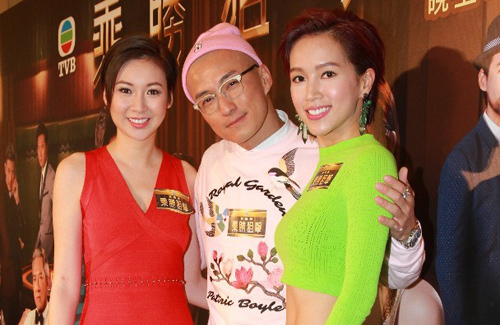 There were many awkward moments for Kelly Fu (傅嘉莉) when she ate her Lunar New Year feast with family. They ate their meal while watching an episode of Kelly’s drama Burning Hands <乘勝狙擊>, which happened to feature Kelly’s bed scene with Joel Chan (陳山聰).

Burning Hands centers on a team of illusionists who were hired by a casino tycoon (Pal Sinn 單立文) to help him investigate missing funds. Ruco Chan (陳展鵬) stars as the leader of the team, who has an alternate motive for agreeing to the case. Joel plays a magician and a member of the team, while Kelly plays Pal’s daughter.

Playing a couple in the show, Joel and Kelly’s bed scene was airing while Kelly’s family ate their New Year’s meal. While Kelly’s father stayed quiet, Kelly’s mother was very upfront with her thoughts.

At a promotional event for Burning Hands yesterday, Kelly shared, “[My mother] kept asking if we really kissed, and if he really touched my sensitive areas. I told her he didn’t. The scene was especially hard for Joel to do. She also asked if Joel really did bite me… I had to explain to her, not really.”

Kelly revealed that there will be an upcoming scene where she has to slap Joel in the face. “I suggested we use camera angles, but Joel told me to just do it. I ended up slapping him four to five times. There was my hand mark on his cheek.”

Joel, on the other hand, did not watch the episode as he was overseas with his family. However, many of his male friends saw it. “They all told me it was great!” Joel described the bed scene as action-packed, as he had to be careful to not touch sensitive areas. “It was like filming an action scene.” To build chemistry, Joel and Kelly chose not to film their bed scene until towards the end of production.

Asked if he planned the vacation so his family could avoid watching it, Joel said, “They could always rewatch it on myTV! I went to Thailand with [my girlfriend] Apple, my brother, and my sister-in-law.”

Are their parents pressuring Joel and Apple to get married? “I need to focus on my career first and save some money.” (Getting married this year?) “I don’t know, but there are plans. I just don’t know when. I’ll let everyone know the good news.”