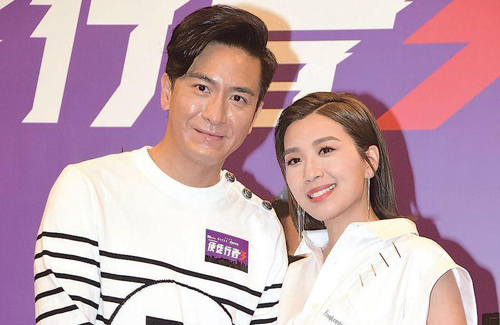 Nominated for Best Actor for Line Walker: Bull Fight, Kenneth humbly said, “I think everyone’s performances this year have been very good overall – I don’t think there are any hot favorites to win. I never vote for myself anyway. In fact, I really enjoy watching Ben and Priscilla’s scenes together.” Believing that Benjamin Yuen, Michael Miu (苗僑偉), Raymond Lam (林峯), and Vincent Wong (王浩信) have higher chances this year, Kenneth said, “Everyone has the potential and abilities to win–it really comes down to luck in the end.”

Upon hearing Kenneth’s praises, Benjamin laughed, “This year has been good to me already – getting married is lucky enough! I really wanted to win last year but Kenneth got the award. That’s why I know that sometimes, you really have to factor in luck. Effort doesn’t always guarantee a win. I did feel sad last year, but this year I think Michael, Raymond, and Vincent have great chances.”

Monday was the Winter Solstice Festival and also Mandy Wong’s 38th birthday. Praising her boyfriend for his thoughtfulness on the special occasion, Mandy revealed, “We were having dinner with my family, and he helped set up and prepare everything. He even gave me practical and useful gifts.”

Sisley Choi (蔡思貝) was teased about whether her holiday plans include rumored boyfriend Hubert Wu (胡鴻鈞). Dodging the question, she said she will only stay home to watch the finale of Line Walker: Bull Fight and has already prepared presents for close friends such as Winki Lai (賴慰玲).