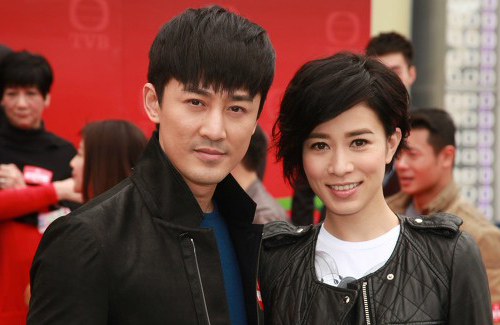 With only four days left until the 48th TVB Anniversary Awards, a leaked list of fixed award winners surfaced on the Internet this week. With much hype over Roger Kwok (郭晉安) and Charmaine Sheh’s (佘詩曼) performances, it is rumored that TVB has already decided to give them the TV King and TV Queen titles this year.

Since Line Walker <使徒行者> is one of TVB’s most popular series in 2014, the cast will reportedly sweep the majority of the awards. Aside from Charmaine winning TV Queen, co-star Raymond Lam (林峰) will reportedly receive the My Favorite Male Character award. Sharon Chan (陳敏之) will allegedly win Best Supporting Actress.

When approached with rumors that TVB has already decided on who the winners will be, Charmaine remained modest. However, Linda Chung (鐘嘉欣), Kate Tsui (徐子珊), and Tavia Yeung (楊怡) already showed signs of giving up on the TV Queen race, and expressed their support for Charmaine.

Making an impression in Come On, Cousin <老表，你好hea!> with his exuberant role as Mario the “Soft Rice King”, Louis Cheung (張繼聰) is a hot favorite to win the Most Improved Actor award. Denying he is the designated winner, Louis said, “I didn’t hear anything about it; I’m the down-to-earth type. I become a little excited when I hear the media talking about it, but I’ll compete with a normal attitude.”