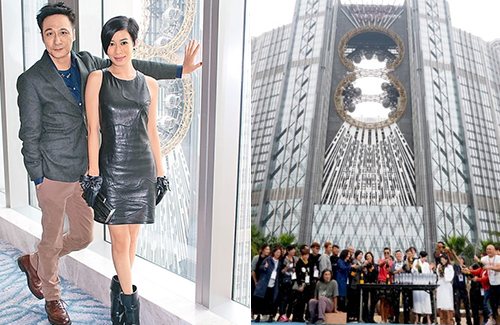 A few days ago, the Line Walker cast were spotted in Macau shooting a scene at Studio City Macau’s Golden Reel ferris, the world’s first figure-eight ferris wheel. Located between the two towers of the resort, the Golden Reel is 130 meters off the ground and can fit up to ten people per pod.

Francis was beyond excited when he stepped into the golden reel pod. “One of the most unique things about Studio City is that it has a ferris wheel that is shaped like the number eight. It is the world’s first and highest figure-eight ferris wheel. I do believe that many tourists would want to check out this unique attraction.”

The Golden Reel, which opened last year, has 17 pods total. Each pod can fit up to ten people, and each ride is about 15 minutes long. “I enjoy the luxurious feeling when sitting in these pods,” said Francis. “Up there, I can see all of Macau and the Pearl River Delta. What a sight!”

Charmaine excitedly said, “I’ve been to Macau many times, but this trip has definitely been different from the rest! I’m very happy to be able to use this work opportunity to also have fun and relax!”