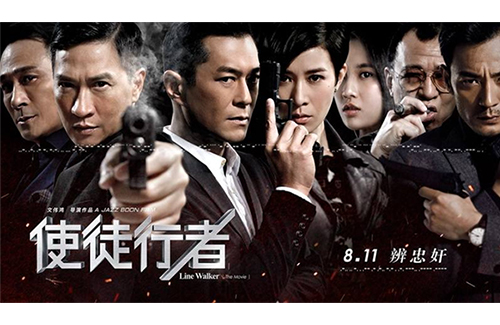 The stars of Line Walker have all expressed their happiness and satisfaction with the box office results. Nick Cheung (張家輝) said, “I’m so happy that I got the opportunity to do a movie that is already so loved by so many people. I’m very satisfied. In the film, I got to go to Brazil with Louis [Koo], and we share a relationship that is pretty much beyond friendship. This movie wasn’t easy to do. I hope more people will continue to support! Watch the movie a few more times!”

Louis Koo (古天樂) said, “I’m happy that the movie has received good results. I hope the box office continues to do better so the cast and crew can get together again to celebrate.”

Francis Ng (吳鎮宇) said, “I’ve been busy with my new film so I haven’t had much time to promote [Line Walker]. I’m very happy with the results. I haven’t shot a movie where I get to hold guns in a while. I got to do all of that in this film, so it was great fun.”

“Ding Jeh” Charmaine Sheh (佘詩曼) expressed, “I’m happy I get to continue my character’s story in the film, and that the viewers are supporting it. I’m sure they were not disappointed. Thank you for supporting Q Sir and Ding Jeh.”

Charmaine also added, “As actors, it really takes a good role with substance to attract viewers. I really want to thank Jazz Boon (文偉鴻) for giving me the opportunity to portray Ding Jeh. In the past ten days, we’ve traveled all over Hong Kong and Mainland China to promote the film, and I have seen the support. They have all grown with Ding Jeh, and witnessed every step with her. I am very thankful to them. This show wasn’t easy to do, but it was worth it. I have no regrets.”

“Foon Hei Gor” Benz Hui (許紹雄) commented, “Charmaine and I have been promoting this film nonstop in the Mainland. The fans were all very passionate and loved the show. I’m happy to know that the movie is receiving great popularity as well.”