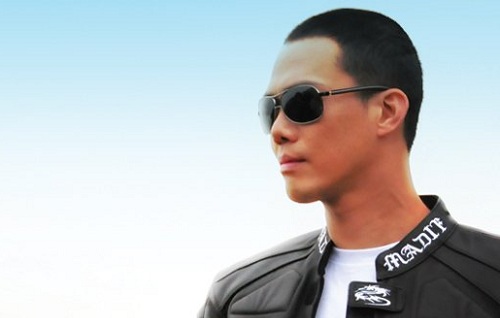 Michael Tse (謝天華) celebrated his 45th birthday surrounded by his good friends from the entertainment industry yesterday.  Before the big celebration, Michael claimed that he would not get drunk.  However in less than three hours, two people had to escort him out of the restaurant!  At least Michael remembered to flash the reporters with his chok look before he went home!

Wishing for Health and Smooth Career

When speaking to reporters outside the celebration, birthday man Michael said, “My birthday wishes are to be healthy and be more successful career-wise.  As I had just finished filming, I’m able to celebrate my birthday on the actual date!  As a present, my wife bought me an underwater camera.  Next month, I hope to go scuba diving with my wife.”

Reporters continued to ask if he will get intoxicated today, Michael replied certainly, “I already booked a car and driver for my drunken friends.  I will not get drunk myself!”

When asked if Janet Chow (周家蔚) had any alcohol during the party? Michael revealed, “I only saw her drink water.  She also ate enough for two people!  Is it because they are still in the first trimester that they can’t disclose?”

Afterwards, reporters advised Timmy and Janet that cars have been booked by Michael for his drunken friends, but Michael did not require one himself.  Timmy hysterically laughed, “He’s not getting drunk?  Who had to be carried out at our wedding?”  Janet explained that she did not drink any alcohol because she was the designated driver.

With such a great gathering of friends, Michael Tse cannot help but have a good time.  Within three hours,  Michael became inebriated.  Accompanied by Sunny and Wilson, he staggered out of the restaurant with his eyes half closed at about 11 PM.  He required the assistance of railings to enter the car.  However, this did not prevent him from conjuring up a chok look for the reporters, exuding Laughing Gor’s character!  He did not stop chok-ing until his wife patted him on the shoulders advising him that it’s time to leave.

Shortly after Michael’s departure, TVB executive Virginia Lok (樂易玲) arrived at the party.  After  she found out that the birthday man has already left, she felt helpless.

24 comments to Michael Tse Gets Drunk at 45th Birthday Party