Earlier on, Moses Chan (陳豪) was exposed by the newspaper to have built a rendezvous nest in Sham Tseng with Aimee Chan (陳茵媺) to facilitate their secret dates and meetings.
Moses smiled sweetly the entire day yesterday and with a face of bliss, he admitted that he was at a stage of half-disclosing their relationship and couldn’t stop smiling and coquettishly flaunting that his current love life was very sweet. Moses continued to say that he didn’t want to lie and deny the “Chans” romance, which progressed to the “dating” stage.

Yesterday, Moses appeared at an event with a face of sweetness and bliss. Moses’ mother was also at the event but immediately dodged when reporters tried to take a photograph of her. When the event organizers gave two capes to Moses, one of the cape was embossed with the initial of Moses’ western name, “M”, while the emcee joked that the other cape should be embroidered with the letter “A” (the initial of Aimee’s western name). Upon hearing this, Moses did not refute and even highly praised, “The letter ‘A’ is also good, ‘A’ stands for high marks.”

Don’t Wish to Say the Opposite of His Actual Feelings

After the event, Moses said that he would give the cape to Aimee and professed that he ever gave desserts and coffee to her. Asked whether Aimee had ever given any “hand knitted with love” items to him, Moses replied, “Good question, I also wish to ask her myself.” (Reporter: Things are currently at a half-disclosure stage?) “Okay lahs!”

Asked whether he and Aimee already have a consensus to disclose their romance publicly, Moses responded, “Let us date a few more times first lahs! I also want to keep things low-key however it’s a pity that we were often caught by you guys (the paparazzi).” (Reporter: You are currently very sweet?) “Yes!” (Very happy in your love life?) “Okay lahs!”

Moses continued to say that he had always maintained a low profile approach in managing his love matters, “When guys ask me, I really want to remain true to my feelings and don’t wish to lie. But I will try my best; I don’t wish to handle this in a high profile manner.” After which, the couple Moses and Aimee will be collaborating on a series, Moses refused to “let the cat out of the bag” and said, “There are many developments inside (the drama with Aimee). In any case you guys will be happy.”

Evergreen Mak Exposed That The Duo Is Dating

In other news, after spending the night secretly meeting Aimee at their new love nest, Moses’ tracks were uncovered when he left and was caught by reporters walking to take his car the next morning. After which, things got more confusing when Moses tried to explain himself and was even unwittingly exposed by Aimee’s “brother” Evergreen Mak (麥長青) that the two were a couple!

Reporters camped for two consecutive nights at the “Chans” love nest and yesterday at around 7 AM, they finally found the trail of Moses. It was known that last night, Moses and Aimee had a secret overnight meeting and Moses only left the next morning. While walking to collect his car, Moses was disguised in casual clothes and held onto his sunglasses case and residency pass.

At first, Moses was extremely cautious, wearing a hat and a disposable mouth mask to prevent recognition but soon let his guard down, thus panicking immediately when he spotted the reporters. Asked whether he would disclose his relationship with Aimee Chan publicly and whether there were plans to build another nest, Moses didn’t respond and only let out a silly smile embarrassingly. Moses also politely waved to reporters as he drove away.

Moses later accepted a telephone interview with the reporters and was inevitably in good spirits. Asked whether he was cohabiting with Aimee, Moses happily replied, “No lahs, I was there to have dinner at my friend’s home.” (Reporter: Who?) “Evergreen Mak.” (Reporter: You left the house and picked up your car at 7 AM the next day?) “Yesterday night, we drank some wine after finishing dinner and I only left the next morning to avoid driving immediately after drinking.”

Moses, however, denied staying together with Aimee in Sham Tseng. Asked whether their relationship had advanced to the next stage, Moses responded, “This is a happy matter.” (Reporter: What is your relationship with Aimee Chan?) “Maintaining it as a dating relationship.” (Not planning to make it public?) “This will have to wait until we date a few more times first.” (The outside world are accepting of this?) “Thank you.”

Faced with constant pestering whether he had moved into Sham Tseng together with Aimee Chan, the more Moses tried to explain, the more confusing things became, “No, but the environment there is good.” (Reporter: But you were holding onto a residency pass?) “Huh? How could it be? I live at Tseung Kwan O, that was the residency pass for my apartment at Tseung Kwan O.” (But to enter and exit the Tseung Kwan O apartment building, one has to use the Octopus transit card).  “That was an Octopus card, if you don’t believe, I can show it to you the next time.”

Moses explained that he only headed there to have dinner at Evergreen Mak’s home and even greatly praised Evergreen’s wife for her superb cooking skills. When asked why he parked his car so far away, Moses said, “To avoid parking at the same carpark as Aimee. So I deliberately parked somewhere further; who would have known that I would still get caught by you guys? I’m a very low-profile person and don’t wish to be talked much about by others. In any case, if I were to disclose this publicly, I would definitely tell Oriental Daily.” (When that day comes, let us take a photo of you holding hands with Aimee?) “Ok, good lahs!”

Asked whether she had built a love nest with Moses, Aimee sweetly replied, “No lahs! Haha, I’m still living at Clear Water Bay. We had a friend there so we went to eat dinner with him.” (Reporter: Is that friend Evergreen Mak?) “Yes, he’s my ‘brother.'” (Is Moses officially your boyfriend?) “I also hope that he will be in the future.”

With regards to Moses saying that he often have dinner at Evergreen’s home, Evergreen unwittingly exposed the couple’s relationship during a phone interview yesterday. Evergreen, who was also known to be Aimee’s “elder brother,” said over the phone, “My sister (referring to Aimee Chan) often comes to my home to have meals with us, to drink some soup and even taught my daughter to speak English.” (Reporter: Did she bring Moses along with her?) “Of course, she did. I’m after-all her ‘elder brother’ so she had to introduce her boyfriend to me.” (They went up to your home together?) “A few times lahs. It’s like that when you just started dating each other, when you are often chased around by the paparazzi, where can you go?”

While attending a promotional event for his new drama yesterday, Evergreen Mak was asked whether Moses did anything outrageous after drinking with him in his Sham Tseng home. To which Evergreen replied, “Moses himself is an adult.” (Reporter: So adults will do activities that adults do?) “We only chatted and were not in the room.”

On the other hand, Moses’ former love, Bernice Liu (廖碧儿) couldn’t be bothered about the “Chans” romance and only revealed about her recent work progress on her blog. In other news, it was known that the “Chans” will starting filming on Lee Tim Shing’s (李添胜) new drama, Ladder to Heaven <天梯> and thus could film and date at the same time.

Neighbor Joey Leung Exposes That There Is Another Secret Passage Way

Yesterday, upon seeing how Moses and Aimee went about their secret meeting, Joey Leung (梁荣忠) went on the radio program he was hosting to self-expose that the two of them (Moses and Aimee) were living in the same housing area and felt that it wasn’t a good sign, worrying that this would incur many pursuits from the paparazzi and in turn, mistake his car as one of their cars. Joey laughed and continued to say, “It’s such a big matter; it’s my turn to move house now! However, Moses, you don’t have to worry. Actually, in our Sham Tseng apartment building, not only are there these two exits that they know about. Let me tell them the other exits lahs!”

In other news, Tavia Yeung (杨怡) and Sharon Chan (陈敏之) attended an opening ceremony for a jewelry shop. Both of them donned jewelry totaling 210 carats and which were worth more than $56 million HKD, dazzling everyone present at the venue. Tavia, who was still single, smiled and said that all that’s lacking now was a guy who could present to her this ring (that she was lent to wear for this event). Good friend Sharon Chan expressed that when she gets married in the future, she will definitely throw her bridal bouquet to Tavia to let her wish be fulfilled soon.

When asked about their opinions regarding Moses and Aimee’s building of a love nest in Sham Tseng, Tavia responded, “I nearly thought you guys meant that Moses has already proposed to Aimee for her hand in marriage! I haven’t read those news reports.” Their manager who was at the side, informed them the whole thing transpired when Moses and Aimee went to Evergreen’s house together for dinner. Tavia then expressed her agreement, “In this case then I will absolutely believe because I know that Evergreen stays at Sham Tseung. The only thing that isn’t correct is that they are lacking a roast goose (Hong Kong people believe that one should bring additional food, usually barbecued delicacies, to add to the table if you join someone else’s family dinner) and they didn’t call us to come. If only they had invited me and we went together then they wouldn’t be rumored. Too bad I had filming work. Eating meals is a happy thing. Actually I often eat meals with Moses in the TVB canteen but why didn’t anyone take photos of us ah? Anyway we have no rumors going on privately.”

When the reporter laughed and said that Sharon should give up her boyfriend away to Tavia, the both of them shared the same sentiments and said no. Sharon smiled and said, “Cannot, Tavia won’t like it. Furthermore, matters regarding boyfriends, two sisters must sort things out properly.” Tavia professed that she often dined together with Sharon and Sharon’s boyfriend, while encouraging them to get married soon. 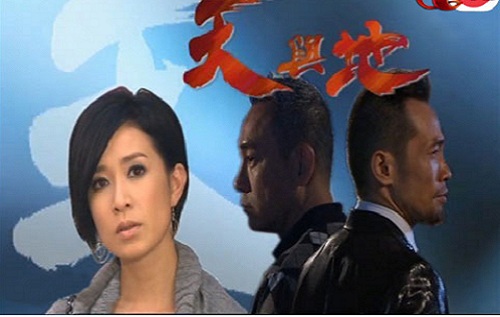 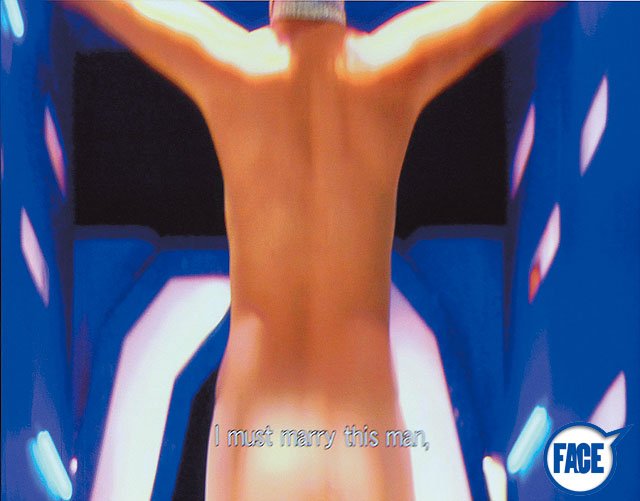 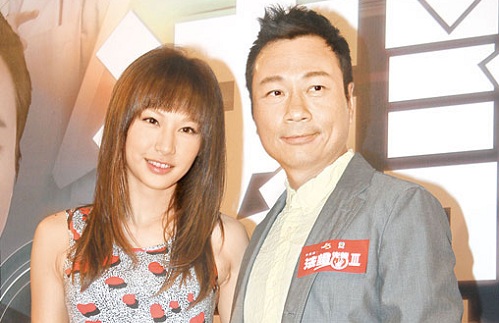