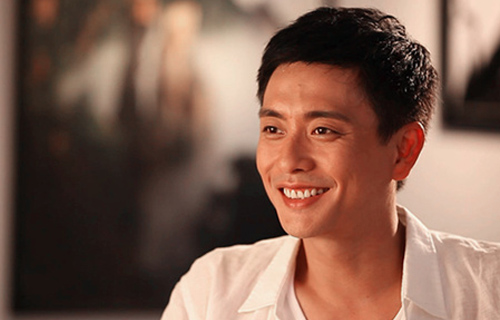 Bosco Wong (黄宗泽) is currently in Shanghai filming romantic drama, The Woman Above the Bread Tree (面包树上的女人), which is an adaptation of Amy Cheung’s (张小娴) novel . Bosco revealed that his character in the series is reserved and easily despondent over love. Bosco said that his real life personality is somewhat similar to the character, with even Myolie Wu (胡杏儿) chided him a boring boyfriend!

In public, Bosco often appears as bubbly and zealous, and not forgetting to use his humor to charm the people around him. He loves to dress flamboyantly and usually matches his clothes with a cap, portraying a sunny image. Off screen, Bosco changes 180 degrees, turning into a quiet and distant person. He even confessed that he is a slightly depressed person in private!

At home, Bosco is a man of few words. Even his girlfriend, Myolie Wu, cannot stand him at times and chided him! Bosco said, “Myolie always reprimands me, asking me to open up more!” He also said that even his assistant could not withstand his blandness. “In private, I am like a nerd! When filming overseas, I do not step out of my hotel room at night. Even my assistant cannot stand me! One time, he pulled me to catch a movie, and asked me not to always stay inside my hotel room.”

Since Bosco and Myolie admitted their romance, the public became very curious about their wedding plans. It was even rumored that he bought a ring to propose to Myolie. Bosco laughed and shrugged off the rumors, “You mean there is such rumor? It’s not true, it’s a joke!” He said that there was no wedding plan at the moment. It was rumored that Bosco had rejected filming TVB series, Triumph in the Skies 2 <衝上雲霄2> for the mainland series, The Woman Above the Bread Tree, due to the extravagant salary offered.

Many TVB artists have turned to filming local productions in mainland China. Bosco was speculated to earn $200,000 RMB per episode, even exceeding Kevin Cheng’s (鄭嘉穎) earnings. Bosco denied the speculated earnings, “Kevin’s earnings are exorbitant! I do not dare to exceed him! If my earnings are higher, he is going to press me for a treat!”

Bosco’s Ambition is to Become a Director

The Woman Above the Bread Tree series reflects the values of the young generation towards love, friendship and money. The series also explores the opinions of the young people in modern society when they need to make a choice between ‘’bread’’ (practicality) and love. In the series, Bosco plays an emotional and dejected music lyricist, which is a big challenge for him.

Bosco has also been given more challenging roles recently, such as in TVB series Lives of Omission <潜行狙击> and Witness Insecurity <護花危情>. The roles are more reserved and expressive than his past characters. He said, “Perhaps I am older and these roles need a more mature man.  Like the character in Witness Insecurity, he is a composed man, and needs to lead a team to protect people. This character matches my age.” Bosco also disclosed that he preferred the role of Cripple Co in Lives of Omission, and had fun playing the street-smart gangster.

TAGS: Bosco Wong, Myolie Wu, The Woman Above the Bread Tree, Triumph in the Skies 2