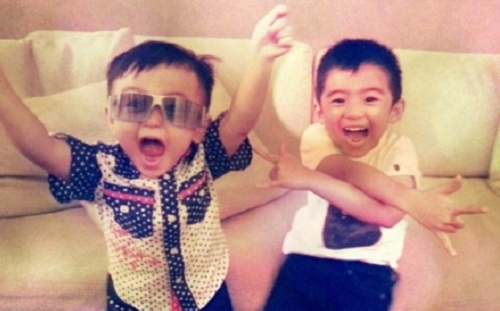 Nicholas Tse (謝霆鋒) and Cecilia Cheung  (張栢芝) will be able to reconcile their romantic relationship.  The most concerned person is likely their eldest son, Lucas.  It was understood that Lucas hopes his parents would reunite, using any chance he has to initiate a meeting between them.

Nicholas and Cecilia Gets Along Harmoniously

Previously, Nicholas had disclosed that Lucas openly requested for them to reconcile.  For his 5th birthday party, Lucas once again brought his parents together to celebrate his special day.  Celebrating one day before his August 2nd birthdate, the excited Lucas was coddling with Nicholas and speaking with his father in English.

In recent photographs, Cecilia and Nicholas were captured eating at a Chinese restaurant while sitting across from each other.  Wearing a cap, Nicholas appeared to be talking and laughing with Cecilia.  Apparently, they were enjoying each other’s company and  getting along harmoniously!  After about 2 hours of celebration, they left the establishment.

This incident seem to confirm previous reports that Nicholas and Cecilia were getting along better in their current status as friends than while married to each other. However, rumors continued to spread that Cecilia hoped Nicholas would have change of heart and eventually reconcile their relationship.

On Lucas’s actual birthday, there was a festive celebration. Lucas and his younger brother, Quintus,  were accompanied by their two child care helpers while returning home in a taxi.  Seeing a group of photographers, Lucas used Quintus to block the reporters from taking pictures of him.  Lucas buried his face in Quintus’ chest.  On the other hand, Quintus was not at all camera shy, looking straight at the camera with his wide eyes!  \

Reporters discovered that Lucas’  arm had an admission wristband from Deep Bay Yacht Club. Apparently, the boys were playing there earlier.

At about 6 PM, Cecilia came out of their residence and attempted to divert the reporters, while attempting to let Lucas and Quintus could go quietly to Nicholas’ mother, Deborah Dik’s (狄波拉) house for dinner.  Continuing the Lucas’ birthday celebration, Nicholas joined the party at Deborah’s house to cut the cake and blow the candles with Lucas.