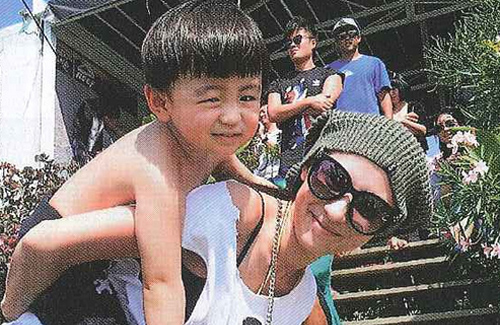 Despite reports that Cecilia Cheung (張栢芝) will move permanently to Vancouver, she may remain in Hong Kong after all.

After her divorce with Nicholas Tse (謝霆鋒), Cecilia cherished her sons Lucas Tse and Quintus Tse even more.  In July, she was rumored to be moving to the Vancouver area in order to provide a better living environment for the boys to grow up. They were spotted swimming in a local community pool and living in a house in the Surrey area. Cecilia even started filling out the school enrollment applications in mid-August.

Once news leaked of Cecilia’s immigration plans, Nicholas Tse’s mother Deborah Li (狄波拉) became extremely upset that she will have less chances to see her grandsons.  Apart from Nicholas, Cecilia apparently cut ties with the Tse family. Cecilia changed her phone number, making it extremely difficult for Deborah to contact Lucas and Quintus. An insider even revealed that Deborah was crying when she was raging to Carina Lau (劉嘉玲) about Cecilia’s methods in keeping Lucas and Quintus away.

Nicholas Gives In To Cecilia’s Conditions

Nicholas, who was stuck in the middle of the battle between his ex-wife and mother, offered to meet Cecilia’s conditions in order to have her remain in Hong Kong. He promised to extend the alimony for an unlimited time and left two large complexes for his sons. Seeing that Nicholas was making an effort, Cecilia decided to give immigration a second thought and moved back to Hong Kong on October 7.

Perhaps already pleased with Nicholas’s offer, Cecilia readily accepted questions and denied wanting to move. “I’m not finished with business in Canada yet. I have never said anything about immigrating to Canada; I don’t know why people have said this. I only went for vacation this time, I didn’t buy an apartment in Vancouver!”

Although she denied purchasing properties in Vancouver, Cecilia is rumored to have  bought a house in December worth approximately $7.5 million HKD.

Despite her unlimited alimony from Nicholas, Cecilia will not be giving up her acting career. Next year, she will film Husband and Wife Killers <夫妻殺手> (tentative title).