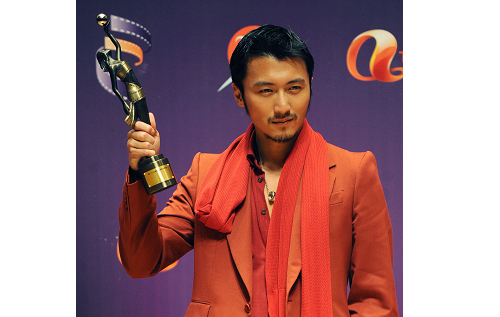 Dressed in a red suit, Nicholas Tse Ting Fung received the Best Supporting Actor Award at the 2010 Hong Kong Film Awards (HKFA) for his performance in Bodyguards and Assassins. Nicholas’ suit matched the red carpet and the media considered him to be the best dressed male at the awards ceremony.

In his acceptance speech, Nicholas thanked Peter Chan Ho Sun, the production crew behind Bodyguards and Assassins, and his wife, Cecilia Cheung Pak Chi. “I am very grateful to Cecilia. I finally returned home after filming last night. In another two weeks, she will be giving birth to our second child. But I have to fly again tomorrow. This month, I only spent one day with her, but she did not get angry at me.”

Nicholas also mentioned his parents, Patrick Tse Tin and Deborah Dik, “I have to thank my Daddy and Mommy, just because I have not thanked them in a long time. Thank you everyone!”

Since entering the entertainment industry at sixteen years old, Nicholas received numerous accolades. In 1999, he received HKFA’s Best New Performer Award for his performance in The Young and Dangerous: The Prequel. In 2004, he received a mainland China Best Supporting Actor award for New Police Story. Earlier, the 29-year-old Nicholas also received the Asian Film Festival’s Best Supporting Actor Award for Bodyguards and Assassins.

Jayne: Congratulations to Nic! Awaiting the good news of Nic and Cecilia’s second child. Only two weeks left until its birth!