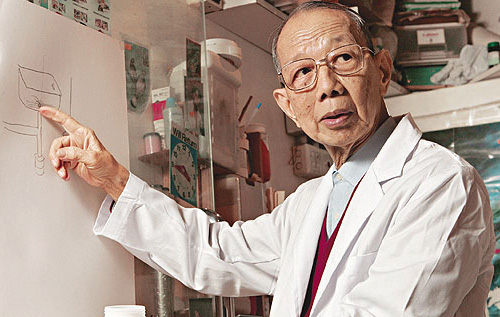 Ken Tsang (曾近榮), also known as Tsang Sir, shared numerous household tips such as degrease dipping powder and all-purpose decontamination cream, with tens of thousands of Hong Kong audiences. For the past 47 years, Ken Tsang has been a trusted adviser and served as a living encyclopedia of household knowledge. On September 10, 2011, Tsang Sir died due to multiple organ failure, at the age of 86-years-old. After the news of Ken Tsang’s death circulated yesterday, some Hong Kong residents rushed to the grocery store business that he had formerly managed to pay their respect and bows. Netizens revisited his classic wisdom and were grateful that he turned his knowledge of chemistry into practical applications in everyday life.

After news of Tsang Sir’s death circulated yesterday on the Internet, his family released a public statement announcing his death in the afternoon. In the statement, it was revealed that Tsang Sir  suddenly felt unwell a month ago in the middle of the night. He was sent to Queen Mary Hospital for treatment of an acute heart condition. After receiving angioplasty surgery, Tsang Sir’s situation was stable and he was transferred to the hospital’s intensive care unit. Due to his advanced age, problems appeared in other organs and his condition worsened. Many family and friends visited Tsang Sir at the hospital. On September 10th, Ken Tsang died due to multiple organ failure.

The Tsang family indicated that they were proud of Tsang Sir for his lifetime achievements and contributions to the community, tireless spirit in learning, and hard work. The Tsang family were deeply saddened by his death and following his wishes, a low-key funeral will be held.

Metro Radio also issued a statement regarding Ken Tsang’s death, noting that he hosted the Metro Radio program Rhythm 783 <節奏783> in the early 1980s and Family Man <住家男人> from 2002 until August 2011. Metro Radio praised Tsang Sir as a knowledgeable and professional veteran and was deeply saddened by his death.

A High School Teacher Prior to Joining the Entertainment Industry

On August 6, 2011, Tsang Sir hosted his Metro Radio program with partner, Leung Tak Man (梁德民) as usual and spoke about the Mid-Autumn Festival and the facts behind moon cakes. Tsang Sir taught the audience that citric acid can be used to remove tea stains. It was shocking that this program episode became Tsang Sir’s last piece before he vanished from the airwaves. On August 13th, Leung Tak Man announced that Tsang Sir was on sick leave and will be substituted by Chin Pui Hing (錢佩卿). Chin noted, “Tsang Sir never took sick days while hosting a program and was very hard working. He can take advantage of his sickness this time to rest.” Leung Tak Man wished that Tsang Sir would recover quickly and will reserve the radio program’s audience’s unanswered questions for Tsang Sir’s return. It was unexpected that Tsang Sir would pass away a few weeks later.

Tsang Sir’s wide-spanning household knowledge included cleaning, repairing and even medical care. In fact, prior to hosting program Applied Learning,  he knew nothing of such household knowledge. Due to his interest and efforts in researching the subject matters, he sought out answers to common perplexing household problems.  In past interviews, Tsang Sir mentioned that he relied on his own efforts to forge ahead and read numerous books. His Metro Radio partner, Leung Tak Man, revealed that Tsang Sir would arrive at least two hours before the start of the program to prepare. After the program concluded on air, Tsang Sir would take home the questions and dead insects sent in by the audience members to study further. Over the past 10 years, Tsang Sir did not take one day of leave from work.

Although Tsang Sir was no longer able to personally answer the audience’s difficult household questions,  his decades of knowledge received recognition among many people. Netizens branded Tsang Sir as an “Older Generation Do-It-Yourself (DIY) Icon,” while a netizen quoted Ken Tsang’s line from Fight Back to School <逃學威龍>, in which he portrayed a chemistry teacher, “In life, you need to have a good memory.” Jayne: Tsang Sir had an affable personality that made him pleasant to watch in TVB sitcoms such as 1986’s City Stories <城市故事>, which also starred a young Deric Wan, Roger Kwok, and Gallen Lo. One of TVB’s classic sitcoms from the 80s, in which Ken Tsang portrayed a humorous family man and Deric’s father.