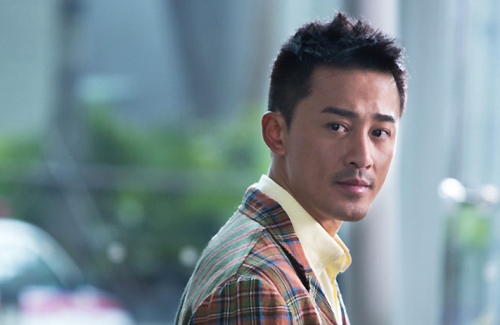 A former TVB production assistant created quite a stir in Hong Kong after he announced that he will be releasing a book that will expose all of TVB’s poor working conditions and rude artistes. The author, known by the pseudo name Ngai Man Ho (偽文豪), did not directly name the artistes mentioned in the book, but Next Media claimed the artistes mentioned were Raymond Lam (林峯) and Ron Ng (吳卓羲).

TVB announced that it will take legal action against Next Media, and is currently investigating the case with its legal team. The station has sent out a memo to all of its managed artistes, urging them to avoid having phone interviews with Next Media subsidiary publications.

Ngai Man Ho claimed that he will spill the dirt of TVB and its artistes in his upcoming book TVB’s Blood, Tears and Dirt <TVB血淚屎>, which will be released on April 14. The book mentioned an actor by the pseudo name “Chok Fung” and “Chau Har Gor”, both who are claimed to be offensive and rude to lower TVB staff members.  There was also an incident in which “Chau Har Gor” shooed a stunt actor out of a van because the actor was “too smelly”. A Next Media publication reported that “Chok Fung” and “Chau Har Gor” are respectively Raymond Lam and Ron Ng.

In regards to the incident of him pushing a smelly stunt actor out of his van, Ron said in a recent phone interview, “That definitely never happened. The smelliest ones should be Raymond Lam and I, and we would always be the ones to leave the van first. We are very close with our action choreographers and stunt doubles. We grew up together, and I would even wear my stunt double’s clothes. Why would I complain about him being smelly? As for the claim that a female assistant had hurt me with a pin, that would never happen. They are professionals and my seniors. I am thankful to have them with me!”

Ron also added that he is friends with many TVB production assistants, but “Ngai Man Ho” does not come into mind.

Raymond Lam also denied Ngai Man Ho’s claims of his profanity-ridden behavior. “I only want to say one thing – I’ve been in the industry for over ten years. Do not ask me. You can ask the staff if I ever behaved like that. I don’t want to be involved in other’s promotions.”

Raymond then defended himself and said, “Many of my colleagues felt it was unfair. They said they knew me for over ten years and never saw me yelling at people, let alone yelling out profanity. This is intentional defamation.”

Elena Kong is Afraid to Pick Up the Phone

A Next Media publication pointed out in its latest issue that Elena Kong (江美儀) was admitted to the hospital after going through three days of non-stop shooting. The magazine claimed that the production crew of her latest drama refused to allow Elena to rest and pushed her to return despite still feeling unwell. Elena responded that she has received TVB’s warning about Next Media, saying, “I’ve become afraid to pick up the phone. I don’t care about reports talking about my no make-up face, but if they are using me to attack others, then it is absolutely unacceptable.”

TVB artistes Moses Chan (陳豪) and Myolie Wu (胡杏兒), who are currently filming for TVB’s upcoming drama Walking with You <陪著你走>, defended their fellow colleagues who were mentioned in Ngai Man Ho’s book. Moses said, “I curse too, but it’s only to myself. When you come across unhappy things at work, arguments are expected to happen. It is very important to maintain harmony when collaborating together! I know production assistants also have a lot of stress. They don’t get enough rest, and during shoots the directors would push them very hard. They are always in a tense state.”

Myolie joked that she likes profanity, explaining, “It’s a way for people to express their emotions. It’s not necessarily to curse at others. Sometimes it’s more about the situation and not the person.”

She added, “When making concessions you can’t please everyone. We all hope to enjoy our day at work and try our best to accommodate each other. We don’t want unnecessary drama. I know the work of production assistants are very tiring, but we all have our options, including releasing a book.” She said she is looking forward to read Ngai Man Ho’s book for pure entertainment.